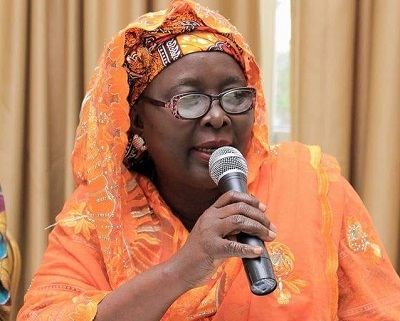 The Chamber for Local Governance (ChaLoG) has scored the Minister for Local Government and Rural Development 40 per cent performance based on her fulfilment of the New Patriotic Party (NPP) 2016 manifesto promises.

The local government think tank said contrary to the Minister’s 90 per cent self-assessment of her Ministry in delivering promises made to Ghanaians in its 2016 manifesto, she performed abysmally in the delivery of the promises in the local governance sector.

This was contained in a press statement jointly signed by the President of the Chamber for Local Governance, Dr. Richard Fiadomor and other executives and copied to the Ghana News Agency.

The statement said “the Chamber for Local Governance (ChaLoG) was greeted with shock when the Minister for Local Government and Rural Development assessed and scored herself as having delivered 90 per cent of the promises made by the ruling NPP in its 2016 Party Manifesto at a Press Conference.”

Stating portions of the NPP 2016 manifesto, the statement said the speedy enactment of the Municipal Finance Bill, initiated by the Kufuor-led administration into law to provide space to Metropolitan Municipal and District Assemblies (MMDAs) to access the capital market for rapid socio economic development and partner the private to provide job opportunities to local people, as stated in the constitution, was not delivered.

According to the statement, decentralizing and equipping the Land Valuation Board (LVB) to provide direct technical support on property valuation to MMDAs for enhanced revenue mobilization as envisioned in the NPP’s 2016 manifesto has not been delivered.

“Upgrade the Tamale Campus of the Institute of Local Government Studies into a modern state-of the-art institute to train local government practitioners and staff in Northern Ghana was also not delivered” it added.

Again, it said “abolishing the current practice of central government manipulation of the District Assembly Common Fund through the procurement process has not been delivered and in fact, has been worsened.”

According to Dr Fiadomor, the party failed to improve allowances paid to Assembly Members and strengthen the role of traditional authorities within the local government system amongst other promises were not delivered as captured in the party’s 2016 manifesto.

According to the Think Tank, the promise of overseeing the direct election of Metropolitan Municipal District Chief Executives (MMDCEs) within 24 months of election into office to coincide with the next District Assembly Elections in 2019 was “delivered though abortive.”

The statement noted that, among other achievements in the sector, the Ministry had delivered on its promise of strengthening the sub-structures of MMDAs through capacity and adequate resource allocation.

“ChaLoG is therefore convinced beyond reasonable doubts, that local government minister has woefully failed to deliver on the NPP Manifesto promises on the local governance sector and should be scored 40 per cent, “the statement concluded.