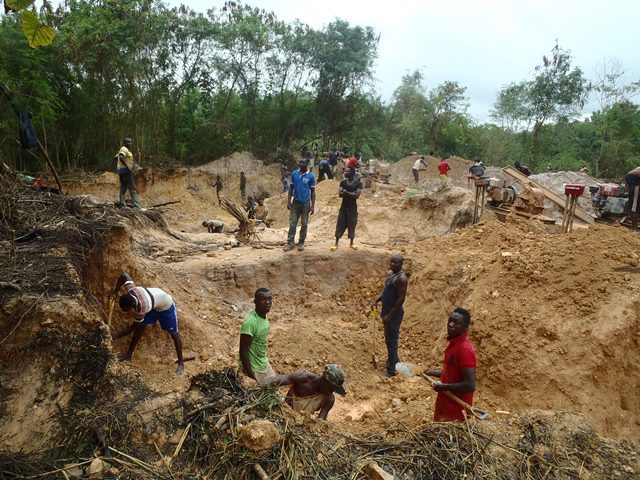 The Minister of Lands and Natural Resources, Mr John Peter Amewu has reiterated government’s commitment to address holistically the menace of illegal mining.

Speaking during a courtesy call on him by members of the Ghana Chamber of Mines, Mr Amewu called for collaboration with the Chamber to take the fight to the illegal miners.

“Mining in the forest and in water bodies must be stopped. We will take the fight to the illegal miners. We therefore need the Chamber’s collaboration,” he added.

Mr Amewu said government policies in the mining sector were geared towards enhancing growth and expressed the hope that by working together the country could achieve the benefits from the sector.

“We can achieve the benefits of the mining industry, if we work hand-in-hand with the mining firms. My doors are opened for your suggestions,” he said.

The President of the Chamber, Mr Kwame Addo-Kufour pledged the Chamber’s support for the new Minister to enable him implement policies and programmes to speed up the growth and development of the mining sector.

Mr Addo-Kufuor underscored the readiness of the Chamber to collaborate with the government to roll out initiatives that would be mutually beneficial to the country and the mining industry.

He said there were many opportunities in the mining industry and minerals value chain to create a viable and competitive industrial sector.

Except in 2015, the mining industry has been the leading contributor to the nation’s fiscal purse. Its contribution to direct domestic revenue improved from GH? 1.3 billion in 2015 to GH? 1.6 billion in 2016, representing a growth rate of 23 per cent.

“Aside from its significant role in improving the balance of payments position, particularly in the context of an IMF programme (Extended Credit Facility Programme), it is also worth noting that it was a major contributory factor for the deceleration in the depreciation of the local currency relative to other traded currencies,” Mr Addo-Kufuor said.

Member companies of the Chamber have returned an average of 73 per cent ($2.4 billion) of their mineral revenue since 2009.

Mr Addo-Kufuor appealed to the Minister to work with his colleague at the Ministry of Environment, Science, Technology and Innovation to address the issue of granting permits for projects, which was a major, challenge facing the mining companies.

There is also the challenge of the paltry 4.95 per cent proportion of the total mineral royalty, which goes directly to the 14 district assemblies in whose jurisdiction mining takes place.

In 2016, mining companies paid mineral royalty of GH? 550 million to the government. This implies that only GH? 27 million is expected to be returned to the district assemblies for development, he said.

Mr Addo-Kufuor said the amount was woefully inadequate for the stimulation of infrastructural development in the mining communities.

However, the President of the Chamber said the mining companies were encouraged by the minister’s commitment to increase the level of royalty revenue to the mining communities to 20 percent from a gross 10 per cent.

He used the opportunity to invite the Minister to the Chamber’s 89th Annual General Meeting and the 2017 Ghana Mining & Energy Summit as their Special Guest of Honour.

The Ghana Mining & Energy Summit opening ceremony would be held on the 30th May, 20017, while the Chamber’s 89th Annual General Meeting would take place at the Accra International Conference Centre on the 2nd June.