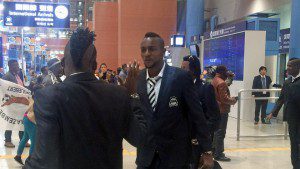 With two clinics, a much-envied youth academy, a modern stadium and their own 40-seat jet, life for African champions TP Mazembe is a world apart from that of their local rivals.

The team from the Democratic Republic Congo, who produced the biggest upset in Club World Cup history by reaching the final in 2010, are once again back in the tournament after winning the African Champions League again this year.

Simply getting to Japan is a remarkable achievement for a team who, according to FIFA presidential candidate Jerome Champagne, come from a country which has fewer grass football pitches that a single Zurich suburb.

But, thanks to investments from chairman Moise Katumbi, the team known as Tout Puissant (all-powerful) enjoy conditions that their domestic rivals can only dream about.

The Stetson-wearing Katumbi, who has made a fortune from mining and other investments, has pumped millions into the club since he was elected chairman in 1997 and his name has become practically synonymous with Mazembe.

Mazembi scout thousands of youngsters for places in their prestigious academy and, by paying generous wages, are less likely to lose their top players to clubs abroad.

Their 18,000 capacity stadium with its modern artificial pitch is a far cry from, for example, AS Dauphins Noir who play on a surface of black volcanic sand in their stadium in Goma.

Having their own plane means they avoid the uncertainties and complexities of flights around Africa.

“We have a president who has revolutionised the club,” said coach Patrice Carteron, whose side face host team Sanfrecce Hiroshima, who qualified as champions of host nation Japan, in their quarter-final on Sunday.

“But we are effectively a club apart and the rest of Congolese football is certainly in a different situation, the infrastructure and the conditions are very different.”

The Frenchman said he was it was difficult to manage expectations after their progress to the final five years ago, when they beat Brazilian side Internacional before losing 3-0 to Inter Milan in the final.

“People don’t realise how difficult it is to reach the final, to beat the champions of Japan and then the Champions of South America,” he said.

“The team had less pressure five years ago. The trouble is that when you’ve done it once, people don’t realise how difficult it is to do it again. We just have to go step by step.”