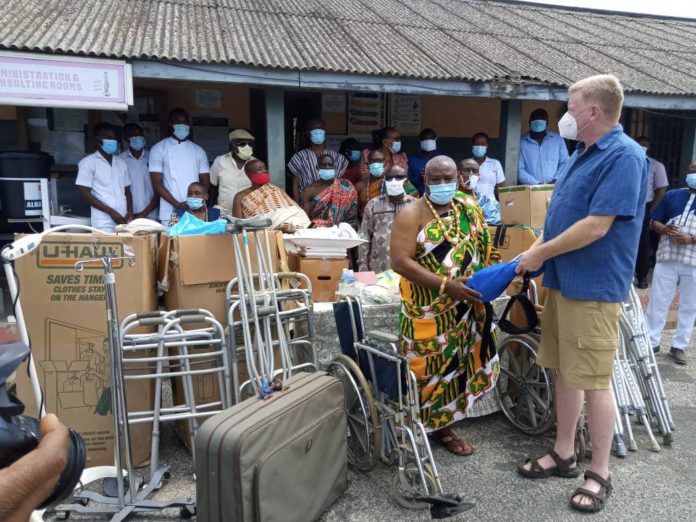 The Charlottesville-Winneba Foundation, a Sister City collaboration, has donated various items to four institutions in the Winneba Municipality.

Items donated include Security Operational materials and Medical equipment and consumables valued at US$200,000.

Presenting the items at sperate ceremonies at the premises of the beneficiary Institutions, former Mayor of Charlottesville, Mr Dave Norris, Executive Director of the Charlottesville-Winneba Foundation, applauded Awutu-Effutu Citizens’ Association in Southern California for sponsoring the shipment of the items meant to provide quality service delivery to the people.

Nana Acheampong Ghartey, a native of Effutu, based in Charlottesville and the liaison officer of the Foundation, said the donation was a result of a Memorandum of Understanding (MOU) between the two Cities and expressed the hope it would strengthen the relationship for mutual benefits.

Mr Henry Asiedu, the Effutu Municipal Fire Officer, who received 100 Breathing Apparatus, some Gloves and Goggles and cylinders on behalf of the Service, thanked the Foundation for the support.

He appealed for a rapid response vehicle and other logistics to help them to quickly respond to emergencies and other related operations.

Mr Oman N. Mohammed, the Administrator of the Trauma and Specialist Hospital, on behalf of the management expressed gratitude to the Foundation for the continuous support to the facility towards quality health care delivery.

He expressed appreciation to the donors, saying it would enhance their work.

Neenyi Ghartey VII, Paramount Chief of Effutu Traditional Area and President of the Traditional Council, commended members of the Foundation for the support and expressed the hope that the relationship would grow for the mutual benefit of both cities.