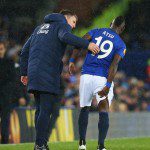 If you?re anything like me, you?ve already managed to forget that Christian Atsu will be spending next season on loan at Bournemouth. You?ve also probably forgotten that Bournemouth are a Premier League team.

We?re all a bit rusty in summer, don?t worry. But Atsu, who endured a miserable, injury-hit season with Everton, is looking forward to a fresh start, and, hopefully, some real Premier League game time.

?Getting to a new club is not easy. You have to work really hard and make new friends which is also difficult, but I am trying!

?I think with Bournemouth, the way I see how the players are, they?re really friendly and their coaches are also supportive so I think everything will be easy for me here. I can?t wait (for the new season) because last season wasn?t that good for me, but this season I am trying to work hard and get into the game, and to score my first Premier League goal.?

From my view, loaning players to newly promoted teams is a much better idea than trying to have them crack established Premier League sides. It doesn?t always work out (see Nathaniel Chalobah at Burnley), but promotion tends to involve a major squad overhaul, and Atsu has the chance to thoroughly integrate himself at Bournemouth this summer as a result rather than simply being an outsider.

We know he?s talented ? his performances for Vitesse and in Brazil with Ghana last summer show that ? but now he has to produce. He should get time to do so next season, so there?ll be no excuse for not getting it done anymore. Here?s hoping for that first goal and many more besides.