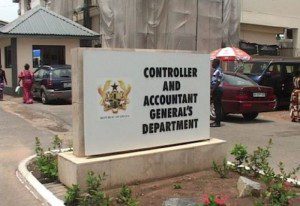 ?changes birthdate to prolong her stay in office
By Roger A. Agana The government?s efforts of clearing ghost names from the payroll seem to be far from over in spite of a number of measures being rolled up by the John Mahama administration to address the problem.
This stems from the fact that, some heads of state institutions that are to help the Controller and Accountant General?s Department undertake proper validation of staff for the government to pay those really at post have for some reason or the other been working against the system.

Credible information made available to this reporter indicates that Ms. Felicia Assimeng-Kore, Headmistress of Chemu Senior High/Technical School in Tema Community 4 has failed to submit the name of a former tutor to be removed from the payroll.
Pay slips of the former tutor, Robert Aidoo with Staff ID 728893 and Social Security Fund number GO88012280015 intercepted attests to the fact that he continues to be paid up till last year even though he left the country to seek greener pastures in Canada in 2012.

Coupled with that, Ms. Assimeng-Kore, from our sources has falsified her date of birth to prolong her stay in office as Headmistress of Chemu Senior High School.
The Chemu head, according to her records at the Social Security and National Insurance Trust (SSNIT) should have been on retirement as of December 23rd, 2012 as the date of birth given to the state agency by her is December 23rd, 1952.
She swore an oath of affidavit in 2012 changing her date of birth to December 23, 1955 and later to 1957 all in her quest to remaining in public service.

The Chemu head, who is said to be a dictator and does not listen to any of her three assistants let alone the teachers between 2010 to 2013 sold admission forms to first year students in spite of the fact the Ghana Education Service (GES) and the Ministry of Education (MoE) forbids heads of schools to do that.
Investigations carried in the school points to the fact that academic performance has been falling ever since Ms. Assimeng-Kore took over as head and our sources attributed that to the divide and rule tactics she has adopted.
The head is also purported to be charging final year students two terms fees before they were registered, charging illegal fees of GH ?219 from the 2014/15 first year students who were not placed by the Computerized School Selection Placement System (CSSPS) without issuing receipts.

Others are single handedly selecting and filling board members for the school with her favourites, using Chemu Senior High School materials? to run FEC Academy, also in Community 4, a private schools she owns as well as using National Service personnel posted to Chemu in her private school.
A call is being made to the government, the education ministry, GES, the CAGD and the Economic and Organised Crimes Organisation (EOCO) to as a matter of urgency institute investigations into the allegations to protect public purse as well as restore the name of Chemu to its past glory.

However, when the headmistress was contacted, she admitted the occurrence but indicate she wrote to the Controller and Accountant General?s Department (CAGD) when they first detected the incident but the name keeps coming onto the payroll.
She further explained that, the tutor?s bank was duly informed about the situation. She however expressed no knowledge about the reasons why the name kept appearing in the payroll for payment.

?You see we got to know about this during validation and we reported by writing to the Controller and Accountant General?s Department, we also informed his Bank, but the name keeps coming, and why I don?t know,? she said.
In seeking more clarification on this matter, spyghana.com contacted IMANI Ghana since the Think Tank has been very instrumental in exposing some anomalies in the nation?s payroll system.

According to the Founder and Chief Executive Officer of IMANI, Franklin Cudjoe much is on the Controller and Accountant?s General to ensure that these things never happen.

To him, it is the responsibility of CAGD to expunge any ghost name from the register and that CAGD is not only to pay salaries but also to check and ensure a clean payroll.

He however faulted the GES and CAGD for the mess saying that GES needs to ensure real time account data to be submitted to CAGD which he believes it failed to do.

148,000 workers’ bio-data do not match any Ghana Card details – Bawumia