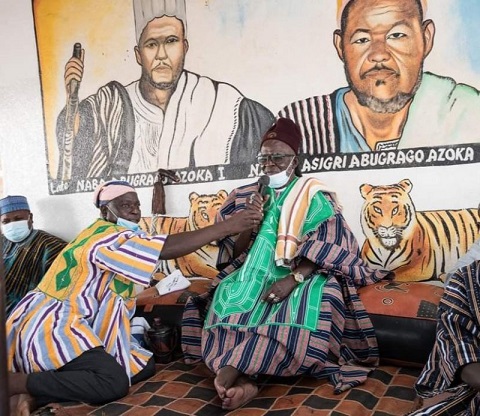 The Paramount Chief of the Bawku Traditional Area, Zugraan Naba Asigri Abugrago Azoka II has appealed to the Government to complete the Community Senior High School (SHS) blocks in the Bawku Municipality to solve the accommodation needs of students.

He said the abandoned Community SHS buildings located at Sapeliga, Pusiga and Garu if completed would increase the enrolment of students, especially the girl child in the Free Senior High School (Free SHS) programme in the Kusaug Traditional Area.

Naba Azoka II made the appeal through his spokesperson when President Nana Addo Dankwa Akufo-Addo called on him at his Palace during his recent working visit to the Upper East Region.

He also appealed to the President to upgrade the Binduri Community Day SHS to boarding status, saying it would “Help curb pregnancies among girls, who for lack of accommodation, are living in local houses.”

This, the Zugraan said exposed the young girls to premature sexual activities with irresponsible men which subsequently affected their academic activities.

He said with the autonomy granted to the Clement Kubindiwo (CK) Tedam University of Technology and Applied Sciences at Navrongo, the Traditional Council would soon collaborate with the University to explore the feasibility of requesting for a satellite campus at the Manga Research Centre.

He said the campus would focus on Agriculture, especially livestock production which appeared favourable to the people in his Traditional Area. “This will make University education easily accessible to this part of the Region.”

“These are also taught at the Gbewaa College of Education at Pusiga, meanwhile the Kusaal language is a course at the University of Winneba where students graduate with Bachelor of Arts in Kusaal after which they are apparently made redundant.”

The Bawku Naba said pupils in the area did not write any Ghanaian language in their final examination and indicated that the approved ones were alien to them.

“We are appealing to the Ministry of Education through your high office to consider making the Kusaal language examinable,” the Paramount Chief told the President.

In response, President Akufo-Addo said “The Community Day Schools that have not been completed across the country are all being systematically completed and I have no doubt that the turn of the ones here will also come very soon.”

Ashaiman MCE calls for the sustenance of Free SHS policy