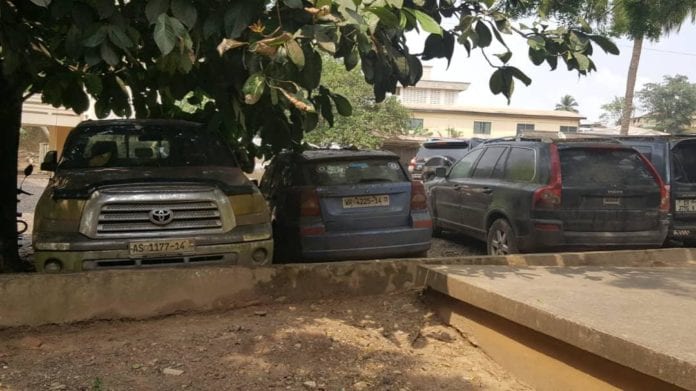 Chief Justice Sophia Akuffo has called on the Tarkwa High Court to clear the abandoned vehicles on its premises, which had been parked there for decades and taking up space.

She said one of the vehicles, which had it windows opened, could be a death trap and, therefore, called on the authorities of the court and the Assembly to initiate immediate measures to clear the vehicles.

Chief Justice Akuffo gave the order when she interacted with staff of the Judicial Service in Tarkwa as part of her five-day working visit to courts in the Western Region.

She demanded to know whether all the vehicles were exhibits for pending cases in court.

“These vehicles are taking up space. Is it because they are stolen or people are fighting over them. Why are they still here?” she asked.

At the Tarkwa Circuit Court, where both the cashier and recorders were sharing the same office, the Chief Justice said; “The recorders should not be where they are, their work is highly confidential, whereas the cashiers work involve interaction with the public.”

The Chief Justice and her team proceeded to the Tarkwa District Courts One and Two, where she stated that an extra court needed to be constructed in the Municipality.

She said considering the kind of investments in Tarkwa, the population would increase and may result in a rise in disputes and crime.

Some common challenges identified in all the courts were the lack of logistics such as office furniture, computers, photo copier machines, lighting systems and decent washrooms.

The Municipal Chief Executive for Tarkwa Nsueam, Mr Glibert Kennedy Asmah, promised that the Assembly would create a conducive and serene atmosphere for the Judiciary to operate.