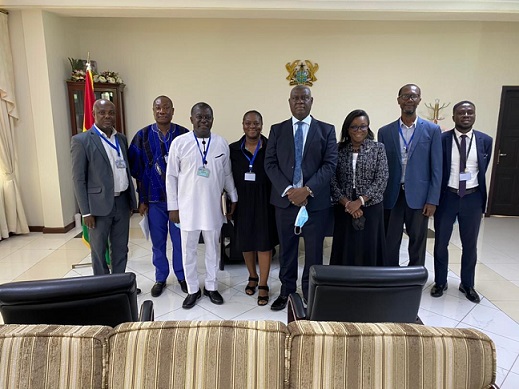 The Chief Justice, Justice Kwasi Anin Yeboah, has pledged his unflinching support for the Green Ghana Project, which is intended to restore the forest cover, ravaged by the activities of illegal mining.

The Chief Justice threw his support behind the Ministry of Lands and Natural Resources initiative when a six-member delegation from the Ministry led by Mr Benito Owusu-Bio, a Deputy Minister-Designate, called on him in Accra.

The Chief Justice promised that on June 11, 2021, which is set aside for the planting of five million trees, he would lead about 18 Judges of the Supreme Court and other Judicial Service Staff to plant trees around the Supreme Court premises.

He stated that the exercise would also help in transforming the court premises and make it greener.

The action, he said, was also in support of the government’s efforts to ignite public consciousness on the need to plant trees, to protect the environment and mankind.

The Minerals Commission delegation at the meeting were there to conclude an arrangement with the Chief Justice on a training programme on illegal mining (galamsey) for Judges, who handle illegal mining cases.

The programme, according to the Acting CEO of Minerals Commission, Mr Martin Ayisi, was to equip the judges to deal with illegal mining cases appropriately and expeditiously.

It was agreed with the Chief Justice that the programme will be held in three major cities namely, Kumasi, Sekondi and Koforidua, where Court likely to sit on galamsey cases are located.

The Chief Justice said the judiciary was very supportive of the fight against illegal mining and charged the Ministry “to commit to dealing with the illegal mining (galamsey) menace once and for all”.