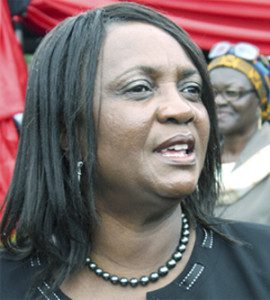 She had her basic education at Bishop’s Girls and Methodist Schools, Dodowa in the Greater Accra Region.

She attended Mmofraturo Girls School, Kumasi from 1958 to 1960. Georgina Wood’s secondary education was at Wesley Girls’ High School, Cape Coast, where she completed in 1966.

She proceeded to the University of Ghana, Legon, where she was awarded the LL.B. in 1970. Georgina Wood then attended the Ghana Law School after which she was called to the bar.

She has also done the Post-Graduate Officers Training Course at the Ghana Police College.
Georgina Wood is married to Edwin Wood, a retired banker.

Georgina Wood is a judge and also a former police prosecution officer. She is the Chief Justice of Ghana and the first woman to occupy the position.

She worked with the Ghana Police Service as a deputy superintendent and public prosecutor for three years.

She later joined the Judicial Service as a District Magistrate in 1974. She rose through the ranks and became the presiding judge of the Appeal Court in 1991.

She was appointed to the Supreme Court by President John Agyekum Kufuor on November12, 2002. She was nominated for the position of Chief Justice of Ghana in May 2007.

She would swear in the President-elect Nana Addo Dankwa Akufo-Addo into office on January 7, as the fifth President of the Fourth Republic.