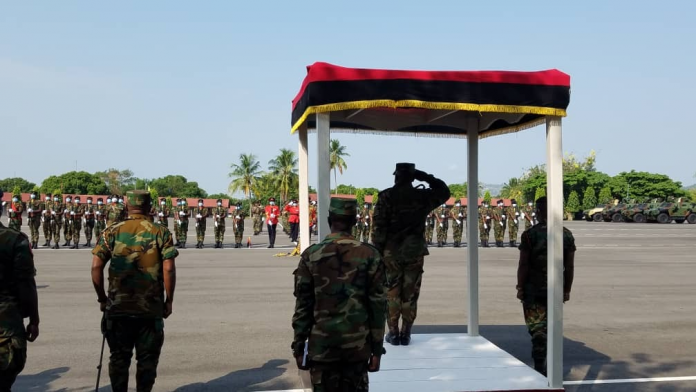 Major-General Thomas Oppong-Peprah, Chief of Army Staff (COAS), on Friday ended his nationwide tour of Units under his command with a visit to the Volta Region.

It was a day’s operational visit to the 66th Artillery Regiment during which he took the opportunity to learn at first hand their administrative and logistical constraints.

The COAS who was in the company of Brigadier General M. A. Amoah, General Officer Commanding, Southern Command, visited the Operation Motherland JFT Headquarters after a briefing by the Commanding Officer of the Regiment, Lt. Col. Edward Sarpong Appiah.

The COAS visited the Artillery Training School at Akoefe and inspected uncompleted projects, including bungalows for officers and classroom blocks.

He also viewed ongoing projects at the Volta Barracks before joining a durbar with the troops.

Maj. Gen. Oppong-Peprah assured the Unit of the construction and renovation of some projects of the barracks and the training school.

He also promised to repair the Unit’s fire tender, and to provide two vehicles for the artillery training school.

The Unit was praised for successes in maintaining peace and security in its operational zones and said the High Command continued to support the effective and efficient delivery of its mandate.

Officers were encouraged to remain united, professional, disciplined, as they remained an important part of the army.

The Unit was also briefed on some projects being recently undertaken by the Army High Command to enhance the administration, and personnel welfare.

MCE for Ho honoured by Shia community at Easter homecoming