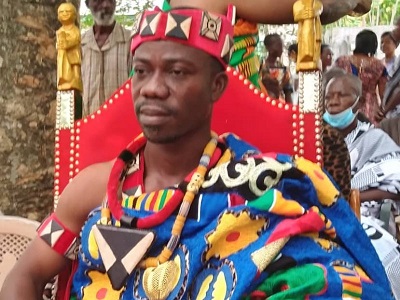 Togbui Adzesi Dzaga VI, Dufiaga of Awudome-Avenui in the Ho West District of the Volta Region has made a passionate appeal to government for financial and material support to complete the community’s Vocational Institute.

He said the dilapidated nature of the existing facility was negatively affecting teaching and learning, thus, the urgent need to provide a new facility for the institute to create an enabling environment to enhance academic work.

Togbui Adzesi Dzaga, who made the appeal at the second edition of Ngoryiza, a development festival celebrated by the people, said the community’s education committee developed an architectural design for a twelve-unit classroom block, four workshops, an administration block, and a standard football pitch for the school.

The Chief disclosed that through levies imposed on, and donations from community members, work had already started on a six-unit classroom block, and pegged progress of work at 70 per cent.

He, however, said lack of funds was hindering the progress of work for the students to move in this year, and, therefore, craved the indulgence of government, benevolent institutions and individuals to support them financially and materially to quicken the completion of the project.

Togbui Dzaga, who is also a Senior Divisional Chief of Awudome Traditional Area, said the community was embarking on the project because progressive development of every society was strongly anchored on the skill pool of its human resources.

The Chief said the Institute was set to equip students with employable skills thereby, reducing unemployment and rural-urban drift and also help improve the local economy of Avenui and its environs.

He said the future of the country’s socio-economic development hedged majorly on hands-on skills training, hence, the need to place special emphasis on vocational and technical education, which aimed at developing the country’s human resources through skill-based training.

Ghana News Agency (GNA) gathered that the school currently has a population of 23, made up of eight female and 15 male and run courses such as electricals, dressing making/fashion, building and construction and information communication technology.

The GNA again gathered that in March this year, the Institute had over 70 students, and that the decline was as a result of the deplorable nature of the facility as most of the students see the facility as a death trap and decided to discontinue their studies

The festival dubbed; “Prioritising Technical Education for Development” coincided with the 4th anniversary of the installation of Togbui Dzaga as Chief of Awudome-Avenui.

It was to encourage entrepreneurship by opening local business opportunities to investors through conferences and partnership engagement to create sustainable jobs and reduce rural-urban migration and mobilise citizens for homecoming to participate in the development of the community through fundraising and sharing of ideas.

The festival was also used to reward distinguished citizens and personalities who contributed in diverse ways to the development of the community as well as render an account to the people on resources and development projects.