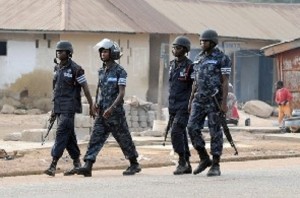 Assistant Superintendent of Police Reverend John Agbemaiese Crime Officer of the Winneba Police Command, told the Ghana News Agency that on the 13th April 2017 at about 1400 hours, the alleged victim Victor Apetogbor came to the station with the left eye swollen and reported having been assaulted by one Neenyi Ansaful III without any provocation.

He said the suspect was arrested and after their investigations he will be arraigned before the court.

Mr Apetogbor told the GNA that his family bought a parcel of land at the cost of One Hundred and Ten Thousand Ghana Cedis (110,000.00) from the Chief at Ansaful near Winneba Junction.

According him they went to the site recently only to find out that the pillars they erected on it had been removed and replaced with trips of sand and blocks by unknown persons.

He said they reported the matter to the chief who promised to refund their money.

Mr. Apetogbor said over three months now all efforts to get the chief to retrieve the said money failed, saying on April 13th, 2017 he spotted the chief in another taxi in Winneba Township and he stopped it.

He said he chased them and managed to overtake the car.

He said he opened the front door to speak to the chief who was then sitting at the back seat but the chief responded by giving him a hefty blow to his left eye him.

He said he then rushed to report the matter at the Winneba Police station.