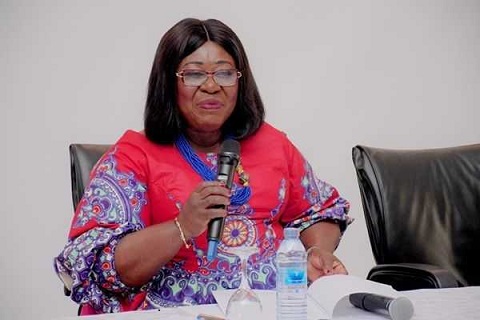 Mrs Frema Osei-Opare, the Chief of Staff, has praised Mrs Freda Prempeh, the Member of Parliament (MP) for Tano North constituency in the Ahafo Region for her strenuous efforts in the development of the constituency in the past three and half years.

She said the lobbying skills of the MP, who is also the Deputy Minister of Gender, Children and Social Protection, ensured the area benefited from several development projects to improve the lives of the people.

Mrs Osei-Opare gave the commendation when she inaugurated some development projects at Susuanso, Duayaw-Nkwanta and Susuanho in the Tano North Municipality over the weekend.

She said Mrs Prempeh remained a great asset not only of the NPP but the people and called on the people in the area to vote and maintain her as an MP in the 2020 general elections.

She also funded the construction of a durbar grounds and a Kindergarten block at Susuanso.

Inaugurating the projects, Mrs Osei-Opare said the MP and the government required support from the people to successfully implement social intervention policies and programmes to improve their lives.

She commended the PURC for the water projects and advised the beneficiary communities to take good care of them to enable them to access potable drinking water.

She complimented the government’s efforts to achieve goal six of the Sustainable Development Goals (SDGs) of providing potable drinking water and enhancing good sanitation by 2030.

On her part, Mrs Prempeh noted that development in Tano North in the three and half years of President Nana Addo Dankwa Akufo-Addo’s government remained unprecedented.

Currently, she said several road networks in the area were being re-shaped, while construction works on many others, including the Techire-Adrobaa road, was completed.

She said almost all communities in the area had benefited from school blocks and boreholes, saying she funded the construction of 75 boreholes.

Mrs Prempeh said electricity was extended to more than 32 deprived communities in the municipality.