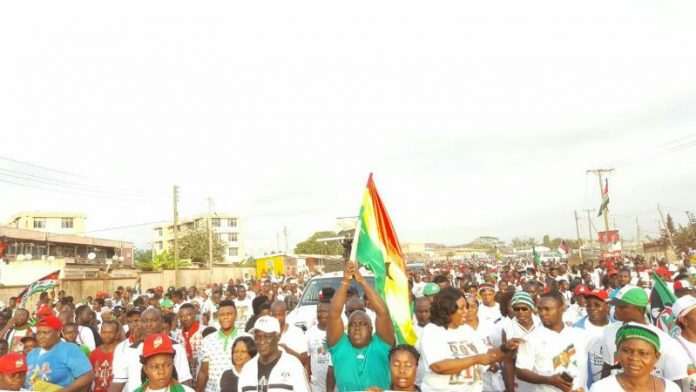 The walk, characterised by singing and dancing, was attended by leading members and sympathizers of the National Democratic Congress (NDC).

The 10 kilometre walk, which started at Teshie Laskala, processed through several parts of the community, and ended at Teshie Park where leaders of the party addressed the gathering.

Mr Danny Anan, a member of the regional campaign team, described the massive crowd as a family which is ready to govern the country.

He urged the supporters to come out in their numbers on December 7th to massively vote for President John Dramani Mahama and Mrs Benita Sena Okity- Dua, their Parliamentary Candidate and Deputy Minister for Fisheries and Aquaculture.

Mr Anan said the NDC is the only party stable enough to govern the country to change the lives of the citizenry.

He used the opportunity to introduce Mrs Okity-Dua to the gathering.

Mr Solomon Nkansah, National Communication Officer of the Party, said the NDC is the most united party ready to govern the country as the New Patriotic Party is divided into two factions.

“If that party is rife with these divisions even in opposition, what will happen if we give them power? They are not ready to govern, so let’s continue to leave them in opposition”.