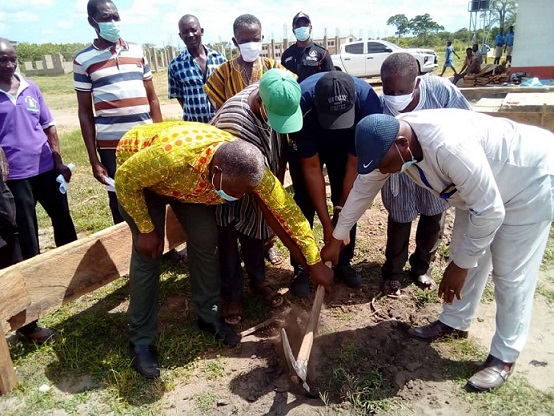 Togbe Lablulu Tegbeza V, Chief of Adaklu Waya at the weekend said they were privileged to have an extraordinary and hardworking Member of Parliament (MP) who was working hard to develop the area and make it an enviable one.

He described Mr Kwame Agbodzah, the MP as “development oriented,” who he said always “walks the talk.”

Togbe Lablulu who was speaking to the Ghana News Agency in an interview on the sidelines of a ceremony to mark the commencement of work on an eight unit classroom block for Adaklu Waya Senior High School said the project, which was his initiative was estimated to cost one million Ghana Cedis and was to be funded by him from his own resources.

The MP called the project “knowledge hub” which he said was dear to his heart.

Togbe Lablulu said the numerous projects undertaken by the MP in the fields of education, health and water were ample proof of his (MP) dynamism and dedication and due to the hardworking nature of Mr. Agbodzah he won national recognition and was voted as the best performing MP for two consecutive times.

“We should be proud and thankful to God for giving us such a person who is working hard to bring development and honour to Adaklu as our MP,” the Chief noted.

He urged citizens of Adaklu to join hands and work in tandem with him to transform and win more honours for the area.

Mr. Agbodzah told the GNA that he would not be destructed by the honour bestowed on him, but would continue to work to make Adaklu a hub of education and health.

FAKS Investigative Services after reviewing its data for 2019 and 2020 survey it carried out named Mr. Agbodzah as the best performing MP for those two consecutive years.

It carries out surveys annually to assess the performance of Ministers, Deputy Ministers, Regional Ministers, MPs and Chief Executive Officers of State Owned Enterprises in the country.

According to FAKS, the survey focused on project initiations, the execution of projects and the impact the project had or will be having on Ghanaians as a whole.

Scoring was influenced by the project initiatives, the project execution and its impact on Ghanaians currently and the future.