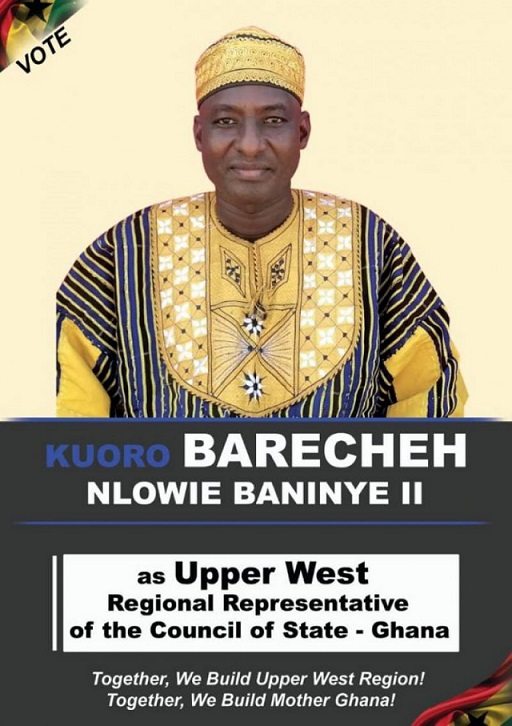 Kuoro Bareche Nlowie Baninye II, the Chief of Niator in the Sissala West District, says he will make the development needs of the Upper West Region a priority if elected to represent the region at the Council of State.

He said leadership was an opportunity to develop the people rather than to seek one’s interest, adding that as a Member of the Council of State, he would take the interest of Ghanaians, particularly Upper West Region, into consideration in his work.

Kuoro Baninye II, who said this in an interview with the Ghana News Agency (GNA) in Wa, noted that he would also court international investors into the region if given the opportunity.

According to him, the region was endowed with numerous resources, which if explored could help facilitate the development of the area.

“The core business of the member of the Council of State is to advise the president, and there is a saying that we don’t have bad leaders, we have bad advisors.

“How can we then develop Upper West if we don’t advise the president about challenges the region is facing. We always go there just to depend on what the government wants to do, that is not what we need to do”, Kuoro Baninye II observed.

He, therefore, advanced the need for the delegates in the region to choose a development-oriented person to represent the region at the encouraging them to allow him to represent and develop the region for the good of all.

Kuoro Baninye II, who is also the Vice President for the Zini Traditional Council, said he had the lobbying skills, which were a critical component of every leader.

“If you don’t have competent people to lead you how will the place develop? If I am elected to represent the region, I am going to link the region to the international world, and we can easily do that. To chart the way forward we need to get active people, who can lobby”, he explained.

He also acknowledged the critical role of the media in national development and noted he would collaborate effectively with the media to develop the region if elected.

Kuoro Baninye II had served as a traditional ruler for about 20 years, and had championed the development of his jurisdiction, especially in the educational sector.