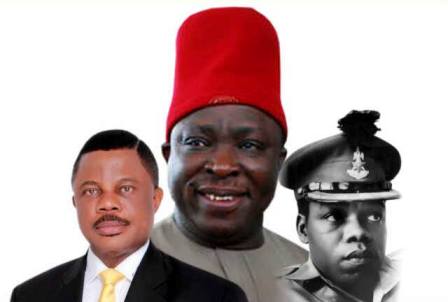 As the race for the Anambra Central Senatorial Seat gathers momentum, Chief Victor Umeh, the APGA candidate walks around with an indulgent smile on his face. And why not? Unlike other candidates who are engaged in a titanic race against the wind, Chief Umeh is running a great race with all the elements in his favour. And here are the reasons ? Of all the candidates locked in this battle of the woodpeckers, Victor Umeh seems to be the one with an iron head. Umeh is the only one among the titans who hasn?t lost a battle yet; whether it is a legal battle or a political one, in the past dozen years or so. Plus the fact that neither the incumbent Senator Chris Ngige nor Senator Annie Okonkwo has personalized the Igbo cause in a compelling way as Umeh has done in over ten years, proudly donning his trademark red cap that marks him out as an Igbo cultural icon. Umeh?s life has revolved around things that affect Ndigbo and he has never shown any hesitation or lack of guts to give voice to the issues that dominate the day.

However, when Victor Umeh wins the Senatorial seat in Anambra Central, as he is bound to, let it be known that he won it not only on account of the promise he holds but on grounds of a solid performance. Truth is, Umeh is a light years ahead of his two challengers in his campaign efforts. Having been handed the party ticket well ahead of his rivals, Chief Umeh has been relentless in his quest to win over the members of his constituency. His campaign billboards loom at you from every corner of the state, stretching beyond his immediate senatorial district. He has striven to reach Ndi Anambra in general without paying any particular attention to the specific zone that will produce the votes. His highly infectious campaign jingles carrying potent messages have enjoyed a massive air time on local radio stations and he has is a beneficiary of the enormous goodwill arising from the superlative performance of the APGA-led administration in Anambra State. He has worked so hard that it would be a miscarriage of justice if Ndi Anambra do not reward him with a resounding victory at the polls. Beyond that, Umeh has also taken the first mover advantage and effectively hoisted himself in a pole position for victory at the moment that it would be a travesty for him not to win.

Unlike Umeh however, his rivals are at six and seven. Senator Ngige has since relapsed into a state of exaggerated sense of self importance, choosing rather to spend more time campaigning for the APC Presidential candidate, Muhammed Buhari than engaging his constituents for the retention of his seat. Sated with his hegemonic hold on all political windows that are open for the members of his constituency, Senator Ngige has grown complacent; believing his own legend as a political cat with nine lives who doesn?t even have to campaign to win an election in Anambra Central. The senator is whimsically taking his constituents for granted. He will soon rise to realize his error. In any case, Senator Ngige doesn?t truly have a strong case to make about his return to the National Assembly after eight years of silence in the hallowed chambers. Besides, it is doubtful whether Nigige?s controversial support of the deportation of his kit and kin by the APC-led government in Lagos State has finally blown away. Many people still nurse a grudge against him for abandoning the Igbo cause when history demanded that he raised a disquieting voice in the APC fold, calling out Governor Raji Fashola for maltreating his people. Unfortunately for Ngige, the people of Anambra Central who are unarguably among the most accomplished of Ndigbo can hardly be led by the noose. It is almost certain that this particularly tragic episode that has refused to go away will not escape their long memory when the time comes. So, for Senator Chris Ngige, it is not yet Uhuru!

However, for Chief Annie Okonkwo, Umeh?s challenger from the PDP fold, it is a different kettle of fish altogether. Okonkwo, a formidable entrepreneur and Senator of the Federal Republic comes across as a top draw any day. He gave a good account of himself when he served his term in office. However, in life, there is a natural progression to improvement that forces itself on the world that not even time can halt. Nigeria has moved beyond the era of silent senators. The clamour for quality representation has become strident. Our cousins in the South West appear to be inching closer and closer to this target with the caliber of congressmen and women that represent them in the National Assembly. Ndigbo cannot afford to elect senators who will be in the house just to make up the number. At this moment in time, only few people in the entire South East can match Chief Victor Umeh pound for pound in the political game and Senator Okonkwo is not one of them. Again, the perennial afflictions of the Anambra chapter of the PDP have left Okonkwo in a polarized house with disparate forces pulling from all corners. A fall is not altogether out of place.

In the end, we hardly need a crystal ball to see that when the dust raised by the on-going campaign finally settles, only one man will be standing ? Chief Victor Umeh. We shall be the better for it though. Truth is; Umeh is already reigning in the imagination of the people. He is highly regarded by respected Igbo leaders across the entire South East and there is hardly anyone with some political awareness in Igboland who does not know Victor Umeh. Another truth though is that Umeh has always stood steadfastly on the path of positive history ? fighting alongside Peter Obi to retrieve his stolen mandate, standing with Dim Chukwuemeka Odumegwu Ojukwu to hold aloft the ark of Igbo politics and rising to his full height to deploy his intellectual firepower and knowledge of polemics in defense of Chief Willie Obiano?s victory when a desperate campaign was mounted by the opposition to discredit the electoral process that made him governor. Before that, Umeh had also successfully installed Rochas Okorocha in and Theodore Orji in Abia as governors before the duo jumped ship. And although his many enemies would like to belittle his contributions, it cannot be gainsaid that APGA would probably have gone extinct but for Umeh?s adroit leadership. APGA would have gone up in a smoke!

It is perhaps for these reasons that Igbo leaders from different zones have affirmed Umeh?s growing influence with almost 20 honorary titles. The Federal Government has also confirmed it with the award of the national honour of the Officer of the Order of the Federal Republic. I am almost certain that come next month, Ndi Anambra Central will with their votes, bestow on him, the ?title? of Senator of the Federal Republic.

All things considered, we should all be happy that finally, fully prepared people are emerging to provide leadership at critical levels. Umeh?s years of closeness to the late Ikemba, his wealth of experience in party politics, evolving stratagems that have kept APGA in power in Anambra State as well as his exposure to the mind-bending intrigues of Nigerian politics at the last National Conference stand him in good stead to speak for Ndigbo at the Senate. Ndi Anambra Central would be doing Ndigbo a great disservice to deny him a well-deserved senatorial seat.

For years we have prayed for quality leaders to emerge. When our prayers are answered, we must have enough discernment to acknowledge and accept them. For now, Victor Umeh is the answer we need in Anambra Central.