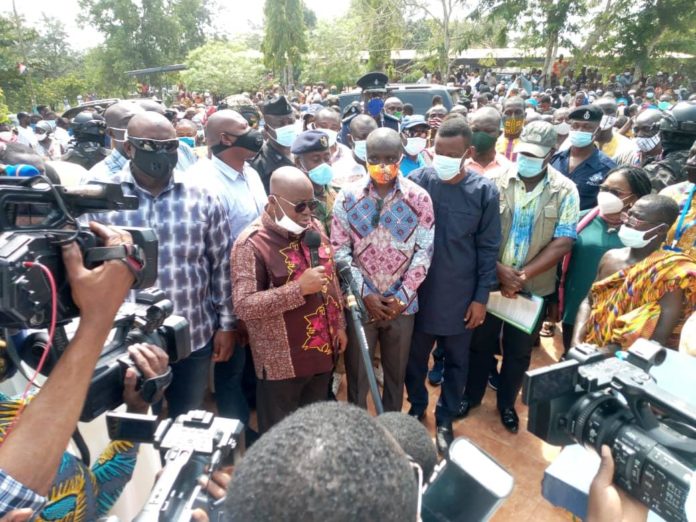 The Paramount Chief for Lower Axim Traditional Council, Awulae Attibrukusu III has appealed to President Akufo-Addo to resource the Axim Government Hospital to address the health care needs of the residents.

He said due to the inadequate facilities in the hospital, residents suffer the risk of transporting patients with terminal illness to the regional Hospital in Takoradi for treatment.

Awulae Attibrukusu III, made the call when the President paid a courtesy call on him as part of his two-day working visit to the Western Region, pointed out that the hospital when resourced would be of great importance to the community and its environs.

He indicated that if the hospital was retooled with some biomedical equipment it would enhance health care delivery to the people.

The Paramount Chief also disclosed that the Divisional Headquarters of the Ghana Police Service in the Nzema East Municipality (NEMA) did not have the requisite number of personnel to man the station.

He said the Division which was supposed to have a total of 70 personnel currently had 30, which he stressed made it difficult for the personnel to carry out their duties effectively and expressed the hope that the President would liaise with the IGP to provide them with more personnel.

He commended the President for honouring his promise by putting up a sea defense wall along the coast of Axim to save their lands from further tidal erosion, which was a bone of contention for the fisher folks and residents in the communities.

Nana Kwamena Adade II, Divisional Chief of Nsuaem bemoaned that the rubber plantation had taken the chunk of their lands denying them of farm lands and others for building and therefore pleaded with the President to liaise with the rubber companies to make available some lands for them.

He also appealed for support for the completion of the traditional palace and commended President Akufo-Addo for giving the Nsuaeman a facelift with massive infrastructural development like roads, a polyclinic and the construction of a community day senior high.

On his part, Awulae Amihere Kpanyili III, Paramount Chief of Eastern Nzema Traditional Council called on the President to help complete the Atuabo Harbour Project, and the establishment of a community mining project and a district hospital.

President Akufo-Addo promised to get their various request addressed as soon as possible and added that the government was working to complete all on-going projects.