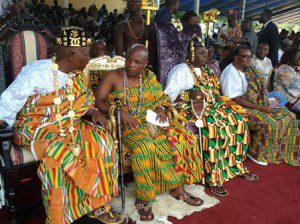 Nii Nuetey Amobi II, Chief of Appolonia, has observed that chieftaincy would continue to play a pivotal role in the development of the country because it embodies the aspirations and values of the people.

?It is an institution borne out of the historical and anthropological circumstances of the people and it would continue to define the identity and heritage of the Ghanaian?.
Nii Amobi was speaking to the Ghana News Agency after a thanksgiving service at the local Saint Stephen?s Methodist Church after he was gazetted by the National House of Chiefs as the lawful occupant of the Appolonia Stool in the Kpone Kantamanso District of the Greater Accra Region.
?It is refreshing to realize that government recognizes chiefs as reliable partners in the development of the country because that would bring about a people-oriented development,? he said.
He called on both local and foreign investors to direct their investments to Appolonia to reap the attractive dividends.
Nii Amobi, who was enthroned after the demise of Nii Teye Adumuah II, called on the people to rally behind him to develop the area into a viable investment destination.
He said he would as soon as possible provide accommodation and other incentives to teachers to motivate them give of their best.