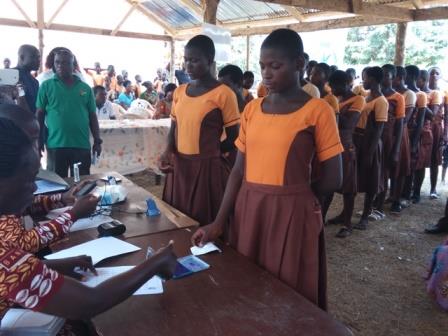 Cases of child marriage are on decline in the Nkwanta North and South districts of the Volta Region since 2012.

This follows the introduction of the World Food Programme’s (WFP) “Take-Home Ration”, now, “cash-based transfers” and interventions by other stakeholders in the two districts.

The “cash-based transfer”, being piloted in the districts is to boost adolescent girls’ attendance, retention and completion in Junior High School and close the gap between boys’ and girls’ enrolment and attendance.

During a field visit to monitor disbursement of the cash with a team from WFP, Mr Jackson Jakayi, Nkwanta North District Chief Executive, said most schools recorded zero cases of teenage pregnancy and child marriage in the last two years.

He said the few cases recorded were from hard-to-reach areas and that the Assembly has passed a by-law to sustain the initiative and eliminate child marriages in the District.

Mr John Thasun, Nkwanta South District Chief Executive, said the cash transfer has increased interest of children and families in education, with a few girls reporting the intentions of their parents to get them married, to the appropriate authorities and were rescued.

He said the Assembly was working out a sponsorship package to support WFP and sustain interest of girls in school adding that a “keep the girls’ off the street” campaign is in the offing.

“The interest in education is very high now in the area. Pupil absenteeism is very low and parents come to school to ask permission absentee children,” he said.

A 15-year student of Bonakye D.A. Basic School told the GNA that two years ago, she and her friends usually left the School before official closing hours but were now among the last to leave the compound.

Mrs Catherine Mikado, Director, Girl Child Education, Ghana Education Service, said in households where adolescent girls traditionally stayed home to help with trading and other chores, the incentives acted as an income transfer and “trade-in” for the lost economic value of the girls’ services at home, whilst boosting gender equity in education.

She urged parents of the beneficiaries to use the financial support for food and educational needs of the children and not for funerals.

Ms Rukia Yacoub, Country Director and Representative, WFP, said the cash transfer made it flexible for families to decide the kind of food they preferred including fruits and take care of educational needs of girls.

She was hopeful the initiative would help girls to have solid foundation and benefit from government’s free Senior High School programme.

Religious bodies asked to provide shelter for victims of abuse