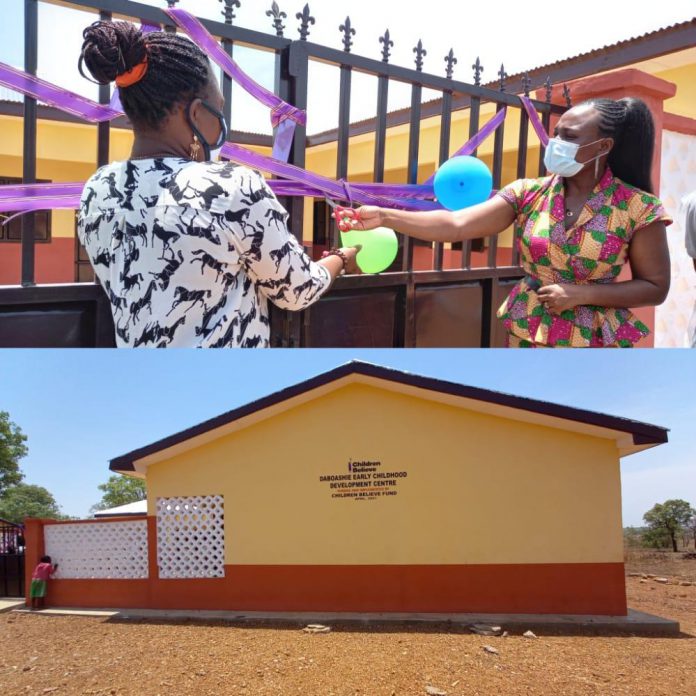 Children Believe (CB), a non-governmental organization (NGO), has built and furnished a three-unit Early Childhood Development (ECD) Centre for the people of Daboashie community in the North-East Gonja District of the Savannah Region.

It also handed over a renovated three-unit classroom block for the Daboashie Primary School to help facilitate teaching and learning in the area.

The newly built ECD Centre, which has an office and a store room is valued at GHS350,000 and the renovated block also valued at a cost of GHS120,000, were implemented and funded by Children Believe.

Mrs Esenam Kavi De Souza, Country Director of CB, who spoke at a durbar to commission the project and to formally announce the exit of her outfit in the community, said it formed part of planned activities to make learning attractive and enjoyable to the children in the community.

She said Children Believe had worked in communities in the Jantong Traditional Area since 1999 to help improve on the living conditions of the people through various initiatives and sponsorship programmes to enhance education of children in the area.

Sharing some of the progress made over the years in the beneficiary communities, she said “we created community learning centers, recruited and paid allowances to volunteer teachers for a start for over 10 years”.

“Through our engagement with local authorities at the Salaga District Assembly, government eventually absorbed and posted teachers to the schools starting 2012 and since then, CB collaborated with Ghana Education Service (GES) to train and equip the volunteer teachers through the Untrained Teachers Development in Basic Education (UTDB) programme to ensure they acquired the requisite skills to assist with education of children”, Mrs Souza added.

The Country Director noted that her outfit upgraded the only Community Health Planning and Services (CHPS) Compound in the traditional area to a Health Centre and resourced it with motor ambulance, deep freezer for cold chain management of drugs and other medical equipment to cater for the health needs of the people in the area.

Mrs Souza said they were able to equip over 200 women with soft skills training, provided potable water for residents and reduced open defecation by constructing household latrines among other development projects in the area.

She said the exit of her out fit in the area did not mark the end of their support to residents, but the beginning of a new chapter of self-reliance.

She urged the people to take advantage of their participation in capacity building programmes they had carried out to take-up innovative strategies to accelerate development in the area to help improve on their livelihoods.

Madam Christiana Maabo Dozun, North-East District Director of Education, expressed gratitude to the CB for their support in the education sector over the years and for building the ECD Centre for the Daboashie community, and said it would aid the development of children in the area.

She pledged her commitment to ensure the facility served the purpose for which it was built, adding “we will maintain this structure effectively so that more children can benefit from it to achieve their future ambitions”.

Yim Naa Sulemana Iddrisu, Chief of Daboashie community, who spoke on behalf of the people, commended the NGO for supporting them with development projects over their period of stay in the area.

He, however, appealed to other institutions to emulate the efforts of CB by providing them with more support, saying; “our community still has more development gaps which we are calling on other organizations to come to our aid”.