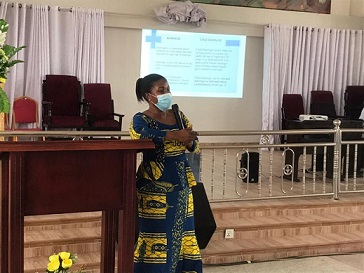 Madam Matilda Banfro, the Greater Accra Regional Director of the Department of Gender, has expressed misgivings about child marriage saying it is a worrisome phenomenon because of its implications of violence, poor health, poverty among others.

She said children were legally prohibited from marrying until they were 18 years, however, they were powerless by themselves to refuse marriages when forced into it, which violates their rights.

Madam Banfro made the statement at a day’s workshop for identifiable groups comprising chiefs, assembly members and departmental heads at Amasaman in the Greater Accra Region.

It was organised by the Greater Accra Regional Department of Gender under the Ministry of Gender, Children and Social Protection to equip the stakeholders to understand the need to prevent child marriages in their communities.

The programme was supported by the Canadian Government.

Madam Banfro said child marriage had become a global problem, which spanned continents and cultures and that according to available data, 15 million girls worldwide marry before their 18th birthday.

“Additionally, it also indicates further that whilst South Asia records the largest number of child brides, the numbers in Sub-Saharan Africa are quite alarming and increasing by the day and African countries account for 15 out of the 20 countries with the highest rates of child marriage,” she said.

The Director said at the national level in Ghana, one in five girls (19%) marry or in a union before the age of 18 and that girls living in the five Northern Regions of Ghana (now Northern, Savannah, North Eastern, Upper East, and Upper West Regions) the number had increased to one out of three girls (34%).

“The key causes of child marriage include poverty, culture, patriarchy, religion, and gender-based discrimination, which makes the children to drop out of school while putting them into pregnancy and associated health dangers,” she said.

Mr Peter Yalley of the Amasaman Municipal Health Directorate said, between January and August 2021, the Municipality recorded 482 teenage pregnancies and called on parents to be vigilant on the movement of their girl-children to prevent them from early sex.

He also urged parents to rebuke their children whenever they went wayward and also encourage them to take their education seriously so that they became responsible adults.

Madam Juliana Abbey Quaye, the Eastern Regional Director of the Department of Gender, advised the youth to avoid alcoholism and other negative vices, which normally pushed them into early sex and teenage pregnancy.