Evangelist Dr Lawrence Tetteh has said Hungarian educational scholarships would be offered to the two children of the late Nana Kodjo Jekrahuda-Appiah, the former Chief Editor of the Ghana News Agency. 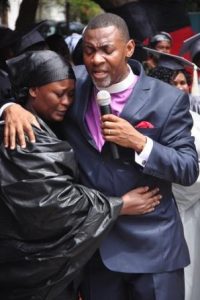 He said Mr Andras Szabo, the Hungarian Ambassador had wanted to offer the scholarship to the children – Nana Kodjo Jehu-Appiah Junior, 15, and Nana Efuah Jehu-Appiah, 13, when the deceased was alive, but Jehu-Appiah requested that the support should be made when the children reach the tertiary level.

Evangelist Dr Lawrence Tetteh, of the World Miracle Outreach, made the disclosure when he delivered the sermon at the Burial and Memorial Service of the late Chief Editor of the GNA at the forecourt of the Ghana International Press Centre in Accra on Saturday.

He said the move was in recognition of the immense contribution of the deceased who offered diverse communication and media services to the Hungarian Consulate over the years as a journalist and Head of the Home Desk of the Ghana News Agency.

The renowned evangelist paid glowing tribute to the deceased for his selflessness and affable nature whom, he described as a brother and a friend.

Evangelist Dr Tetteh said it was the late Jehu-Appiah who coined these titles “well-renowned evangelist, and “international evangelist” when he wrote stories from his preaching.

The renowned evangelist expressed a deep sense of loss for his sudden demise. Nonetheless, he urged believers to be thankful to the Almighty in all circumstance because He alone knew the reason certain things happened to us, saying; “This one too is for good
whether good, bad or ugly”.

The late Jehu-Appiah, 55, was survived with his wife and two children.

The emotional farewell ceremony attracted both young and old from all walks of life who shared fond memories of the deceased and described him as an affable, loving and an approachable person with great sense of humour.

There were tributes from the wife, children, the Ghana News Agency, the Editorial Department and the Communication Workers Union among others.

Nana Kodjo Jekrahuda Jehu-Appiah died on September 11 at the Korle-Bu Teaching Hospital after a short illness.

The mortal remains of the deceased would be buried at the family cemetery at Mozano in the Central Region.

The burial service attracted both young and old from all walks of life who shared fond memories of the deceased and described him as an affable and approachable person.
GNA/Newsghana.com.gh

ECOWAS Deploys 55 Observers to the Presidential Election in Cabo Verde