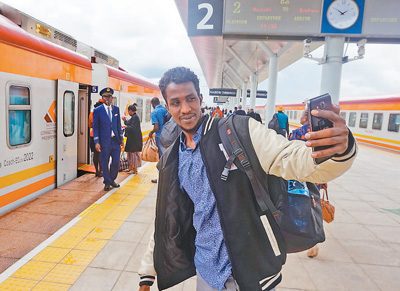 By Wang Yunsong from People’s Daily

China and Africa have, in recent years, made important progress from a batch of big projects thanks to their mutual efforts in expanding cooperation fronts and deepening collaboration in infrastructure construction, a key engine to help China and Africa align their development strategies and build an even stronger community with a shared future.

Such efforts have laid a strong foundation to improve the people’s livelihood and develop the economy in Africa, with the China-constructed standard-gauge railway connecting landlocked Ethiopia to Djibouti serving as one of the epitomes.

The Addis Ababa–Djibouti rail line, an “iron dragon” running through Ethiopian Highlands, is constructed with Chinese technology and equipment according to China standard.

“The rail line brings night-and-day difference. Thank Chinese friend!” said an excited Djiboutian passenger Abdullah who has taken the line three times, adding that before the rail line was put into use, the buses were the only transport he could choose  when going to Dire Dawa in eastern Ethiopia.

“In the past, it took me 18 hours because of the poor conditions of the road, and the trip was unsafe as well. Now, I can arrive there in 4 hours by the comfortable train carriages,” Abdullah told People’s Daily.

The China-built Standard Gauge Railway (SGR) in Kenya linking Mombasa with Nairobi, also a key project under the framework of the “Belt and Road” initiative and the ten major cooperation plans between China and Africa, has created more than 46,000 jobs for local community.

As Kenya’s largest infrastructure project since its independence, the rail line is also a symbolic project under the China-Africa cooperation on construction of Africa’s high-speed rail network, highway networks and regional aviation and industrialization, as well as production capacity.

It is believed that the railway will generate better future for both the business climate of East Africa and local business men, said a construction contractor from Mombasa.

Under the China-Africa cooperation framework, a package of projects, including rail lines, industrial parks and special economic zones, are now under an accelerated construction or have been put into operation, most of which make up the short boards of Africa’s weak infrastructure.

Thanks to the railways, highways and ports constructed by Chinese firms, more and more African residents have their life changed.

“When you set foot on the land of Africa, you will see many projects invested by Chinese enterprises, who are helping African countries build roads, railways, airports and ports,” Namibian President Hage Geingob said, adding that African countries are witnessing a prosperous infrastructure construction under the support of China.

In the Republic of Congo, the Chinese-built national road connecting the country’s capital Brazzaville and coastal business hub Pointe-Noire has shortened the travel time between the two cities from a week to six hours after its full line was opened to traffic in 2016.

About 4,000 vehicles are now running on the highway each day, far more than about 100 ones in previous days.

With a total investment of $2.82 billion, the highway spanning 536 kilometers, which is also the biggest cooperation project between China and the Republic of Congo, is now the latter’s main traffic artery, and reputed by local residents as “road of dreams”.

Hailing that Chinese constructor has brought the dreams of generations of local people into reality, Congolese President Denis Sassou Nguesso said that “China is sincere in helping us develop economy”.

China-financed Karuma hydro power plant, also a model for China-Uganda economic cooperation, has employed over 6,000 Ugandans, accounting for 87 percent of its workers in total.

Upon the completion, the plant will generate 4 billion kilowatt hours annually and provide more than $200 million in revenue to the Ugandan government, which is close to 1 percent of its gross domestic product.

In Rwanda where rough mountain roads blocking the flow of materials and personnel, China Road & Bridge Corporation is renovating the road connecting Eastern Province of Rwanda to Tanzania and Uganda.

Road construction is not an easy job in the country known as “land of a thousand hills”. Upon the completion, the project will greatly ease the transnational trade and transport pressure between Rwanda and other East African nations, leverage economic vitality of local community and ultimately bring Rwanda’s geographical advantage as the “heart of Africa” into full play.

With China’s help, the “land of a thousand hills” will be connected to more roads and break the bottleneck in transport with traffic arteries, said Rwandan President Paul Kagame.

By this March, China has put into use or made arrangement on over 90 percent of the funds it pledged to support the ten major China-Africa cooperation plans.

In the Beijing Summit of the Forum on China-Africa Cooperation (FOCAC) to be kicked off on September 3, both sides will plan for prior areas and key direction of bilateral cooperation for the next three years or a longer period, and more attention will be paid to public livelihood, employment, as well as other fields needed by Africa’s economic transformation and upgrade.