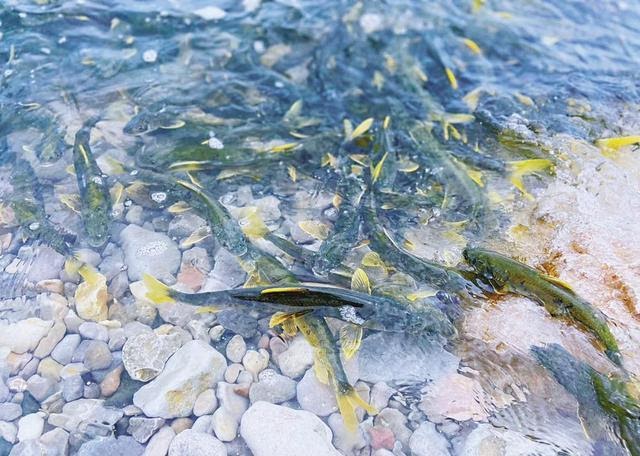 Qinghai province in northwest China, known as the country’s “water tower,” is where multiple major rivers start flowing. It boasts rich ecological resources and serves as a shield that protects the country’s ecological security.

The “fish guards” will patrol along the river course for publicity of fishing-ban policies. Besides, they will also search for, report and stop illegal fishing and other illegal practices that hurt aquatic plants and animals and the ecology of fisheries areas.

A ten-year fishing ban has officially taken effect since the very beginning of this year in key waters of the Yangtze River. From April, 3.4 million fish fry of native species, including naked carp, have been released by the province into the Qinghai Lake, the Yellow River and the Yangtze River. As planned, the province will release a total of 21.15 million fry this year.

“In the old days, people built dams on rivers for irrigation, as a result of which massive broodfish were stranded and died as they were not able to go upstream to spawn,” said Qi Hongfang, researcher of a center dedicated to protecting the naked carp in the Qinghai Lake.

According to her, the gonad development of naked carp needs stimulation of the streams, and shortened migration distance could directly undermine the reproduction of the species.

To protect the migration of naked carp, Qinghai province has dismantled the dams on Shaliu River, Quanji River and Ha’ergai River since 2010, and built and reconstructed seven migration channels for the fish.

Qi introduced that each of the stepped channels is 100 meters long, and there are a 30cm stair and a pool every 1.6 meters along each channel where the fish can rest. “Most of the fish are able to go up rivers along the channels,” she said.

“Naked carp is the most fundamental part of the water-fish-bird-grassland ecology of the Qinghai Lake. They are a critical link on the ecological chain and vital for the protection of biodiversity in the region,” said Tseten, deputy director of Gangca county’s agri-animal husbandry bureau.

According to monitoring data in December, 2020 from Yangtze River Fisheries Research Institute, Chinese Academy of Fishery Sciences, the Qinghai Lake had 100,400 tonnes of naked carp, 38 times the figure in the initial days of preservation, and over 30 percent of the original reserve.

Bird species also benefited from the efforts. From 2015 to 2019, the total population of water birds around the Qinghai Lake reached 250,000 to 370,000. The number of bird species kept growing and there was also an obvious increase in biodiversity and species richness. The Qinghai Lake has become one of the breeding places that sees the largest reproduction of migratory birds and the highest concentration of migratory bird population.