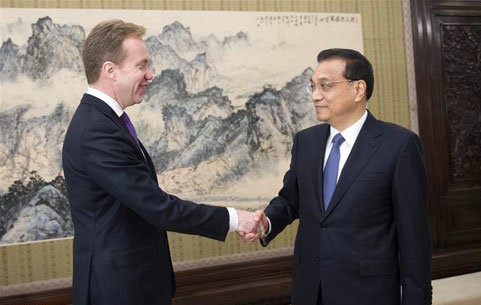 According to the statement, the Norwegian government reiterates its commitment to the one-China policy, fully respects China’s sovereignty and territorial integrity, and attaches high importance to China’s core interests and major concerns.

Following is the full text of the statement:

The Government of the People’s Republic of China and the Government of the Kingdom of Norway have, through consultations, decided to realize normalization of bilateral relations as of today.
1. China and Norway recognize that our two peoples have enjoyed traditional friendship. Norway was among the first Western countries to have recognized and established diplomatic relations with the People’s Republic of China. Over the years, generally speaking, the China-Norway relations have maintained sound development and the cooperations have been deepened in all fields.

2. Before the Nobel Peace Prize award in 2010, China and Norway had close relations. Due to the Nobel Peace Prize award and events connected to the Prize, China-Norway relations have deteriorated. The Norwegian side is fully conscious of the position and concerns of the Chinese side and has worked actively to bring the bilateral relations back to the right track. Through meticulous and numerous conversations, the two sides have over the last years reached a level of trust that allows for resumption of normal relationship.

3. The Norwegian Government fully respects China’s development path and social system, and highly commends its historic and unparalleled development that has taken place. The Norwegian Government reiterates its commitment to the one-China policy, fully respects China’s sovereignty and territorial integrity, attaches high importance to China’s core interests and major concerns, will not support actions that undermine them, and will do its best to avoid any future damage to the bilateral relations.

4. China and Norway recognize that our two countries share broad common interests and have great potential for increased cooperation in many important fields. Both sides will develop friendly relations on the basis of mutual respect, equality and mutual benefit. Both sides will promote mutually beneficial and win-win cooperation in various fields, such as trade, culture, science, education as well as polar and other issues. Both sides will enhance communication and coordination on international issues and jointly deal with global challenges, so as to benefit our two countries and peoples, uphold world peace and promote common development.