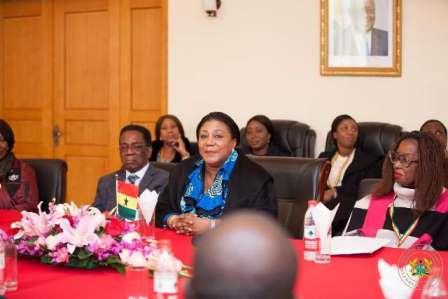 China is ready to strengthen solidarity and coordination with Ghana and other developing countries, with an aim to building and growing mutually beneficial cooperation.

“Whilst the world is full of hope as well as challenges, no country can deal with the challenges facing mankind alone,” Madam Sun Baohong, the Chinese Ambassador to Ghana, has said.

The Chinese Ambassador was speaking at the inaugural ceremony of the Model Confucius Institute Building at the University of Ghana, Legon.

She said China’s Foreign Policy was to forge a community with a shared future for mankind and build a new type of international relations with mutually beneficial cooperation at its core.

Madam Sun said the Confucius Institute had become a bridge between China and foreign civilizations, and served as an “important window” through which China could deepen its friendship and cooperation with other countries.

She said while promoting the teaching of the Chinese Language and the dissemination of Chinese culture to the world, the Confucius Institute had also made notable contributions in promoting cooperation between China and other countries.

The Chinese Ambassador said the Confucius Institute had become a leader in the teaching of the Chinese Language in Ghana, the practitioner of bilateral cooperation in the educational sector, a communicator of Chinese culture and a bridge to promote mutual understanding between the two peoples.

She commended the directors and staff of the institute, observing that it won the honorary title of Global Model Confucius Institute within just two years of its establishment.

Prof. Ebenezer Oduro Owusu, the Vice Chancellor of the University of Ghana, commended the Head Quarters of the Institute in Hanban and the Zheijhang University of Technology for their support towards its completion.

He urged the directors not to rest on their oars, but to work relentlessly towards the continued progress of the Institute.

Dr M.A. Jianfei, the Deputy Chief Executive of Confucius Institute, Hanban, China, in congratulatory letter, said: “The completion of the building of the Model Confucius Institute at the University of Ghana marks a remarkable achievement of the friendship and close cooperation between the two countries.’’

‘’At this new starting point, let us make joint efforts to better operate the Confucius Institute so as to make greater contribution to the educational and cultural exchanges between the two countries, towards their mutual development,’’ he said.

Mrs Catherine Afeku, the Minister of Tourism, in a speech read on her behalf, said Ghana and China had a long standing relationship since the first Republic, under the Presidency of Dr. Kwame Nkrumah.

She said that relationship had been nurtured over the years with monuments such as the National Theatre and the Ministry of Defense buildings bearing testimony.

Mrs Afeku commended the Confucius Institute for promoting both the Chinese culture and language, which ultimately promoted good relationship between the two countries.

“I look forward to closer collaboration between my Ministry and the Confucius Institute to promote more exchanges between Ghana and China in the areas of tourism, culture and the arts for our mutual benefit,” she said.

The Confucius Institute at the University of Ghana was established in May, 2013 and commenced its operation in April, 2014.

Based on its achievements, the Institute was given the status of a Global Model Confucius Institute in December 2015, by the Headquarters in Hanban.

With support from the University of Ghana and the Zhejiang University of Technology, and donations from the Headquarters among others, the construction of the building, which started in August, 2016, was completed in November, 2017.