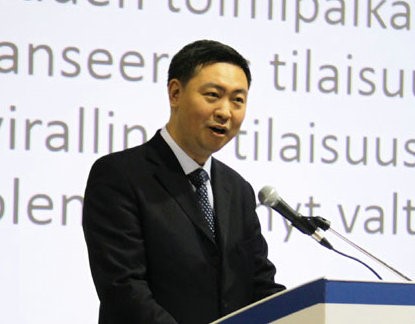 My first mobile phone was a Nokia, and so were the next couple of devices following it. Before the popularization of smartphones, I was always a fan of Nokia phones, whose ring tones still refresh in my mind. 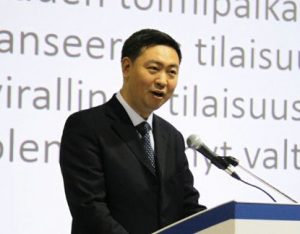 At the end of 2016, I was assigned as Chinese Ambassador to Finland, the home to Nokia. Santa Claus and Nokia were always labeled as name cards of Finland, but after setting foot on this piece of European land, I found that the country, with a population of only 5 million people, is enviably leading the world in many aspects.

It is the most environment-friendly and safest country, with the best basic education and labor quality. Its innovation capability also tops the world. The charm of this European country is like a bottle of mellow rice wine, which tastes better with time.

As Chinese Ambassador to Finland, I believe China and the European country enjoy a pure friendship which will never be cut off by the long distance.

Finland was among the earliest Western countries to establish diplomatic ties with China. Back to 1950s, the Chinese visit paid by then Finnish Speaker of Parliament Vieno Sukselainen set a precedent of bilateral high-level exchanges.

In addition, Finland was the first Western country that inked inter-governmental trade agreement with China, at a time when the first Olympic delegation of People’s Republic of China attended the Olympics in Helsinki.

Ever since, the two countries have developed a friendly relationship which runs on a fast track. The diligent and introverted Chinese and Finnish public launched pragmatic and efficient collaboration as well.

Their relations have witnessed a leapfrog development in recent years, which can be evident by frequent high-level visits, bolstering trade, active people-to-people communication and booming cultural exchanges.

Finland is also greeting a rapidly growing Chinese visitors and investors. What’s more, Chinese has been included in after-school courses of some Finnish elementary and middle schools, as well as the curriculum of some universities.

Currently, the two countries, with shared grounds in their development strategies, can complement their advantages in industrial structures and technologies. Finland’s advanced conception in environmental protection, technological innovation, education and nursing care will brace for a brilliant future under the cooperation with Chinese capital and market.

After Finland takes over a baton to chair the Arctic Council this May, the cooperation on Arctic affairs between the two countries is expected to be enhanced. In addition, with Beijing winning the bid for 2022 Winter Olympics, winter sports will be another highlight of bilateral cooperation.

Today’s world, which is now going through profound changes, is presented with emerging challenges and opportunities. China and Finland have a lot in common when it comes to global governance. To maintain willpower in the ever changing international environment and contribute positive energy to world economy and international order is a shared mission for both parties.

The year of 2017 marks the centennial of Finland’s independence. Chinese President Xi Jinping, upon the invitation of Finnish President Sauli Niinistö, will kick off a three-day state visit to the country on April 4.

The upcoming trip will not only be the first one by a Chinese president to Finland in 22 years, but also Xi’s first trip to an EU member this year. It exhibits the importance of bilateral relations and the firm will of both states to further develop their relations.

In 2013, Chinese and Finnish heads of state reached important consensus to establish a new type future-oriented cooperation partnership. It is believed that Xi’s visit will further expand the connotation of pragmatic cooperation, improve bilateral relations and point a way for future development.

China-Finland friendship is about to embark on a new journey. It is expected that the two countries will usher in a new chapter of development under joint efforts and promotion of both heads of state.

(The author is Chinese Ambassador to Finland)