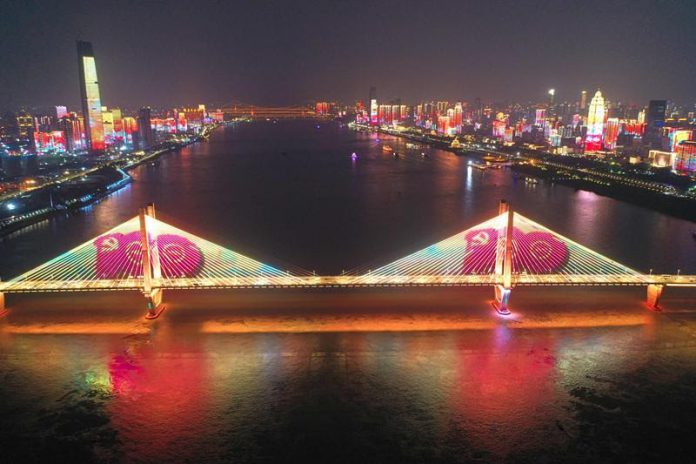 “The Communist Party of China (CPC) and the Chinese people will keep moving confidently forward in broad strides along the path that we have chosen for ourselves, and we will make sure the destiny of China’s development and progress remains firmly in our own hands,” said Xi Jinping, general secretary of the CPC Central Committee.

Xi made the remarks at a ceremony marking the centenary of the CPC on July 1, showing the world China’s determination to stick to its path of socialism with Chinese characteristics.

“We must follow our own path—this is the bedrock that underpins all the theories and practices of our Party. More than that, it is the historical conclusion our Party has drawn from its struggles over the past century,” Xi pointed out.

What kind of path a country chooses depends on whether this path can truly solve the historical issues troubling the country. Socialism with Chinese characteristics is a fundamental achievement of the CPC and the Chinese people forged through innumerable hardships and great sacrifices, and it is the right path for China to achieve national rejuvenation.

Foreign friendly personages believe that China has, under the leadership of the CPC, created a miracle of rapid economic development and long-term social stability rarely seen in the world, which fully demonstrates that socialism with Chinese characteristics is the road to success.

By upholding and developing socialism with Chinese characteristics, the CPC and the Chinese people have pioneered a new and uniquely Chinese path to modernization, and enabled China to catch up with the times and even begin to lead the times.

Shaking off sufferings and securing glorious achievements in the past century, the Chinese people have become more aware of the great significance of the hard-won socialism with Chinese characteristics for China.

By upholding and developing socialism with Chinese characteristics, the CPC and the Chinese people have created a new model for human advancement and expanded the routes of developing countries to modernization.

Martin Albrow, British sociologist and fellow of the British Academy of Social Sciences, noted that the success of the CPC lies not only in leading China to making extraordinary achievements, but in providing a new governance model for the world.

The CPC has led the Chinese people in firmly following a development path that suits China’s national conditions, and secured tremendous achievements in uplifting the livelihood of the Chinese people and rejuvenating the Chinese nation, said Abiy Ahmed Ali, Prime Minister of Ethiopia, adding that the successful experience of the CPC is worth learning from by other countries.

Socialism with Chinese characteristics is a road established based on China’s realities, and a path formexid through open innovation.

China has in the past years succeeded in pioneering a development path that suits itself by drawing on both the wisdom of its own civilization and the practices of other countries in both the East and the West. In exploring this path, China refuses to stay insensitive to the changing times or to blindly follow others’ footsteps.

The CPC and the Chinese people have blazed a development path suitable for China, and found a governance pattern that agrees with China’s national conditions. They are willing to share China’s development experience with any other country in need.

The CPC and the Chinese people are also eager to learn what lessons they can from the achievements of other cultures, and welcome helpful suggestions and constructive criticism, according to Xi.

“We will not, however, accept sanctimonious preaching from those who feel they have the right to lecture us,” Xi stressed.

Under the leadership of the CPC, China will never succumb to any external pressure, or change its established development pattern and development path, according to Ong Tee Keat, chairman of the Centre for New Inclusive Asia, a Malaysian think tank focusing on the studies of the new dynamics of Asia.

Bearing in mind the dream of realizing national rejuvenation, China has embarked upon an even more magnificent journey. Marching along the path of socialism with Chinese characteristics, the country is determined to win greater victories in the future.

The CPC will continuously lead the Chinese people in achieving miracles in the history of human development and creating a more prosperous and beautiful future for mankind together with the international community.