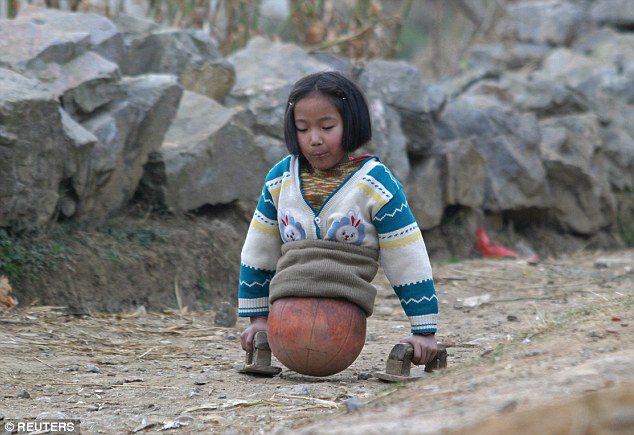 Qian Hongyan from Yunnan, pictured aged 10, lost her legs in 2000 after a car accident that nearly took her life

Qian Hongyan came to worldwide attention in 2005 when pictures of her using a basketball to balance on while she moved around were published.

The young girl, from Yunnan, south west China, had both her legs amputated following an accident that nearly resulted in her losing her life when she was just four-years-old. She was soon dubbed ?Basketball Girl? for using the ball as substitute limbs but she has now turned her life around after becoming national champion in the Chinese National Paralympics Swimming Competition in 2009.

Following her accident, Qian?s grandfather cut up an old basketball to replace her legs, and she would use this and wooden pads with handles to move around.

Her impoverished family had no money for treatment but when pictures of her spread around the world, donations soon came flooding in and Qian travelled to Beijing to have prosthetic legs fitted when she was 10-years-old.

But with her family still poor, they could not afford to keep Qian in school and she was facing a bleak future.

However, the 11-year-old refused to accept her tough circumstances and she joined local swim team South of the Cloud ? set up specifically for people with disabilities.

Through sheer determination, Qian became a national swimming champions within a few years, winning gold and silver medals in the Chinese National Paralympics Swimming Competition in 2009.

In 2010 she added two more silvers to her haul and a bronze in the Paralympic qualifiers in 2011.

After failing to qualify for the team, she took a break from the sport but returned in style, winning more medals, including gold at the Yunnan Provincial Paralympic Games last year.

Qian has proved that anything is possible and is an inspiration to the world ? for those with disabilities and without.