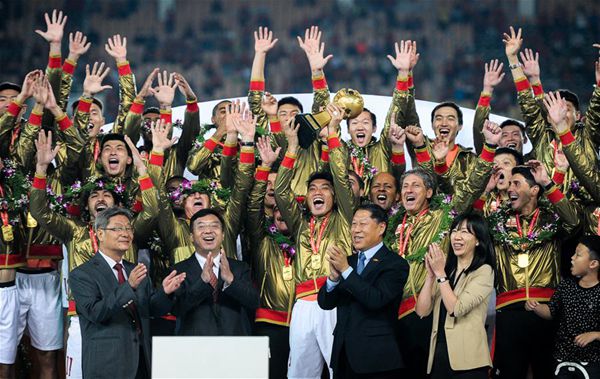 Chinese football kicked off this year by throwing down about 300 million U.S. dollars during the winter transfer window, and came to an end of the season last weekend with Guangzhou Evergrande completing a domestic league and Cup title double after pipping Jiangsu Suning in the two-legged Chinese Football Association Cup final. A sober assessment of how 2016 went for Chinese football is in order.

The cashed-up Chinese Super League didn’t mean that a good season was a foregone conclusion for supporters. After the high of such an exciting slate of transfers, Chinese football fans have had to face a long and hard road.

Chinese football had a satisfying first half in 2016. The Chinese women’s football team returned to the Olympic tournament again after 2008, while the men’s team advanced to the final Asian qualifying round for the World Cup for the first time in 15 years.

But in the second half, things got complicated.

China’s women footballers were defeated by Germany 0-1 in August in their quarterfinal at the Fonte Nova Arena, but also say they have gained much experience and confidence from the Rio Olympics.

“We’re very satisfied with what the young team did in the tournament, and we will do something to make the team better for the 2019 FIFA Women’s World Cup and 2020 Tokyo Olympics,” said team manager Yu Hongchen.

According to the overall reform plan to boost the development of the sport in China, the ‘Steel Roses’ middle-term goal is to get back to the world’s top level. Both Yu and China’s head coach Bruno Bini said that period may be about 10 years.

China’s hopes to advance to the 2018 FIFA World Cup finals dimmed as they lost 2-0 to Uzbekistan on October 11, collecting only one point from four matches played and standing last save for one in the six-team Group A. China’s former coach Gao Hongbo, 50, announced his resignation at the post-match press conference.

Italian Marcello Lippi took over Gao’s position on Oct. 22, arousing mixed feelings from the Chinese fans. But the 0-0 draw with Qatar in the fifth round of the World Cup preliminaries sparked controversy nationwide. 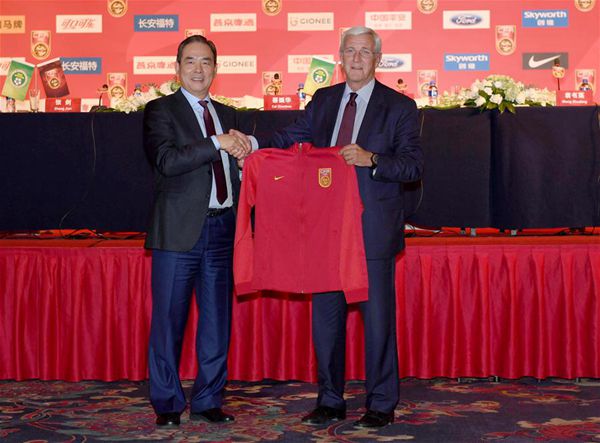 “It is not worth a large sum of money to hire a World Cup winning coach just for six games,” said one netizen.

“The foreign aids can help Lippi’s Guangzhou Evergrande win everything, but the local footballers help him win nothing,” wrote another netizen in a post on China’s Twitter-like Weibo.

The controversy, which started from the beginning of the year, was once more stirred at the end of the year as the CSL concluded. Some fans and media argued that the expensive imports into the CSL could impede the development of Chinese soccer rather than spur it.

Despite having one of the best youth training systems in the CSL, Hangzhou Greentown became one of the demoted sides this year.

“Just having many talented players is not enough to become a powerful side,” said former Dortmund star Karl-Heinz Riedle.

“A strong team should have experienced players,” the 51-year-old added.

China aims to have good performances in the Asian Games, Olympic Games, the Asian Cup and the World Cup in the next five years.

According to the 13th five-year plan on competitive sports, China’s basketball and volleyball teams are eager to copy football’s reform experiences, aiming to count themselves among the world’s elite. Only time will tell if they can achieve this feat.