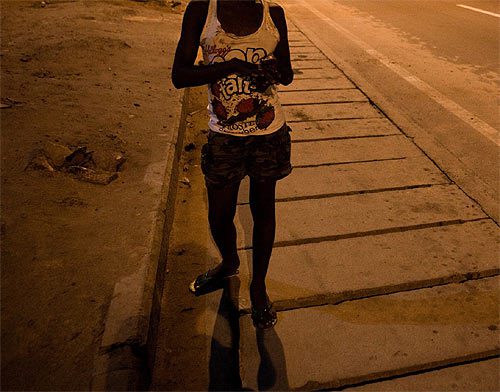 Many young women are unwittingly trafficked to foreign countries, where desperation leads them to the streets

The non-governmental organization, which asked not to be named, works closely with the Ugandan internal affairs ministry to rescue and repatriate trafficked women in Guangzhou. The ministry says a recent communication from China indicates a reduced number of Ugandans being trafficked to Guangzhou for sexual exploits.

The more stringent rules, enforced in 2012, make it difficult for Ugandan women under the age of 35 to get a visa from the Chinese embassy.

The forms of exploitation registered in Uganda include sexual exploitation, labor exploitation, use of persons ? including children ? in illegal activities, human sacrifice, child marriage, removal of body organs for sale, harmful child labor and practices similar to slavery.

However, according to the NGO, the challenge pending is that those who were trafficked before the 2012 regulation have been stranded in detention cells in China for several years.

Their passports were confiscated by their bosses with overstayed visas.

?Anyone who was trafficked years ago should have reported to police and is at this point no longer a victim but a criminal. Because of this, it is literally impossible to legally and safely help trafficked women with overstayed visas go home,? a reliable source told Binoga.

The immigration entry and exit bureaus there have made it nearly impossible for trafficked women to go back home even if they have $3000 (about sh8.4m) to pay the required fines, on top of also having enough money to buy a plane ticket.

Instead of allowing the women to leave, they are arrested and forced to serve an indefinite amount of time in a detention facility.

?Ugandans who go to China under unclear reasons risk being trafficked and incarcerated in the China cells,? Binoga warns the public.

It is unsurprising that it has also become a hub for international human trafficking.

The high population of foreign men in this area has contributed to the demand for foreign women to be brought to Guangzhou through human trafficking for the purpose of sexual exploitation.

According to the Ugandan ministry of foreign affairs says, there are about 1.5 million Ugandans working abroad, including many who are there illegally.

By Cecilia Okoth, The New Vision