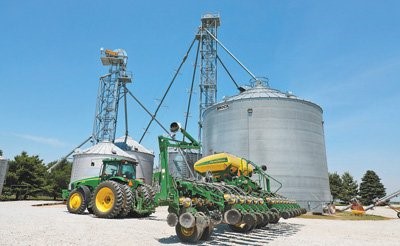 A Chinese think tank delegation on Sunday paid a visit to Kimberly farm in Iowa State, whose name became popular among Chinese people after hosting the then Chinese Vice President Xi Jinping in 2012, with the aim to remove the obstacles to the development of Sino-US agricultural cooperation.

Headed by Wei Jianguo, who was a former vice minister of commerce, the delegation is to attend a US-China Think Tank Summit after visiting the farm in the outskirt of Des Moines, capital city of Iowa, a state of fish and rice.

Farm owner Rick Kimberly and his son Grant Kimberly showed the delegates around the machinery, barns and farmland, sharing their experience in the business model and management.

When addressing the US-China Agricultural Symposium in 2012, Xi said Chinese government pays great attendance to the development agriculture and rural areas because food security is key to the welfare of 1.3 billion people.

The delegation wishes to listen to the US farmers’ expectation toward the agricultural exchange between China and the US and respond to their concerns, so as to resolve problems, said Wei, who is the executive deputy director of China Center for International Economic Exchanges.

“Xi’s visit has brought dramatic and surprising changes to our lives,” Rick said. In October 2016, the 4,000-acre Kimberly farm inked an agreement with Lishu county in Northeastern China’s Jilin Province to set up a model farm to showcase modern agriculture.

In November, 2016, Terry Branstad, now US Ambassador to China and then Iowa Governor signed an agreement with Chengde city, Hebei Province to build a friendship farmland during his visit to China.

Rick told the People’s Daily reporters that China is a major producer, trader and consumer of agricultural products that enjoys rich resources and a huge market.

“The rapid economic development in recent years has driven up Chinese consumers’ attention on food security,” Rick said, adding that their high demand for imported healthy food will bring chances to US farmers.

“I have visited China eight times since 2013, and the people there are the most hospitable ones I have ever met,” Rick said, suggesting that every US citizen should pay a visit to the country. He added that exchange deepens mutual understanding, and the Chinese people are just as friendly and simple as the Iowans.

Rick took out a photo which shows that Xi met with his son Grant at the Great Hall of the People in 2013. “Xi asked Grant to convey his regards to me and my wife, which made me feel honored and warm,” Rick said proudly.

Grant, who serves as the director of Market Development for the Iowa Soybean Association, has visited dozens of Chinese cities since 2008 and witnessed all the changes China had made.

Hailing China is the most energetic agricultural market in the world and the largest export destination of US agricultural products, he noted that China will transform from extensive development to intensive growth with the emphasis on innovation and agricultural technology, which means abundant opportunities for the US agriculture.

Wei said that he has felt the strong desire of US people to cooperate with China after talking to the Kimberlys, adding that there is vast space for cooperation and mutual learning between China and the US, such as how to attract young talents to work on modern agriculture.

Statistics from US-China Business Council indicated a rapid growth of Iowa’s export to China during 2006 and 2015. In 2015, the state exported $1.4 billion of agricultural products to China and achieved a 257 percent growth.

China and Iowa enjoy profound friendship, Bill Northey, secretary of the Iowa Department of Agriculture & Land Stewardship, told the People’s Daily. He said he was impressed by China’s continuous development and huge market in agriculture.

“Iowa is an agricultural state that tops the US in terms of corn, egg and pork production,” the secretary said, adding that the two countries share a well-established and unshakable foundation for agricultural cooperation.

Northey hoped that the two countries could deepen cooperation and learn from each other for the sake of common development.