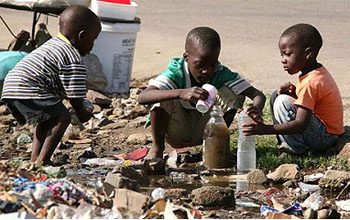 Human beings are social and biological beings; they interact with their own kind in various ways, they respond and react to maladies in their own system; as a result of their relationship between their environment and themselves. A pandemic means ?a disease that spreads over a whole country or the world? (Oxford Advanced Dictionary, New 8th edition).

By the above meaning, cholera which had had its toll on this nation is then a pandemic. It began with the recording of tens of people; hundreds of people, then to thousands of people across the length and breadth of certain parts of this nation.

As usual, the nation begun to put its arsenals together to combat this pandemic- proactive or not there were frantic efforts to kick cholera away like that child in a certain advert kicking the polio football away.

Some of the efforts were, the moving into action to begin cleaning chocked gutters, run campaigns on keeping clean environments; washing of hands after visiting places of convenience; getting rid of slums which produced more cholera cases.

However, in the face of all the crises, there were critics of the efforts that were rolled out for the immediate victory over cholera. What then was the bone of contention?
That a certain slum, Mensah Guinea had been demolished leaving the slum dwellers nowhere to go, nowhere to school and nowhere to go about their normal activities. The very elite in society who see things wrong in our society also see wrong with the measures that are pursued to correct these wrongs. This is common with the Ghanaian politician across our political divide.

The truth of the matter is the failure of the state to take care of its citizens. If the state has well equipped institutions, both in human and financial resources, there should not be the case where children will be left in the limbo after some demolition exercise.
The negligence of duty by those in authority and their indulgence towards the wrongs that surround us continue to be our bane. Our social institutions are not resourced to take care of the poor, so the poor must take care of themselves; consequently, slums will emerge in an attempt to provide that basic human need- shelter.

In fact this pandemic has been as a result of the failures of the authorities put in charge to ensure that our attitudes are checked. Again, as a people we fail to admit that our attitudes are wrong and changing from it is very difficult for us. People build in water ways, dump refuse in gutters, openly defecate in and around their own surroundings. We only wake up to the realisation when there is a flood, demolition, or a pandemic.

For example, there is an observation I have made in the Wa Municipality of the Upper West Region. People are tied to the habit of open defecation. It is a brazen act that is normal. Teshie, a community in the Ledzokuku Municipality in the Greater Accra Region also has this malady among them.

Socially, there is a malady of negative attitudes that can only go away through conscious efforts at changing the mindset and understanding of our actions and inactions; attitudinal change cannot be achieved in a day. It must be done consistently to permeate our very communities. Efforts to change negative attitudes should not be a nine day wonder.

Cholera is a health issue; health is a holistic concept which recognises the strength and influence of negative attitudes. Cholera becomes a medical pandemic when negative attitudes such as open defecation, indiscriminate dumping of refuse into gutters, and not practicing personal hygiene. Cholera in this sense is acquired as a result of the germs that emerge as a result of the unhealthy attitudes that are shown brazenly.

In an attempt to understand health and its relation to the subject of discussion, health has been viewed as a dynamic equilibrium between human beings and their environment and sickness or a disease as maladjustment of the human organism to the environment; this is a view held in the field of development communication.

Since human beings live in the same ecological environment as the germs, the spread of cholera becomes our lot. Then we arrive at the point where it becomes a medical pandemic. Again, it means that there have been disequilibria between the very environment and us through our negative attitudes.

It is this disequilibrium that brings about the result of cholera cases that are reported daily these past three months; albeit it is seemingly dead. Education must be intensified consistently.

With my head above the parapet, I say cholera is a social pandemic which has led to a medical pandemic in our country.