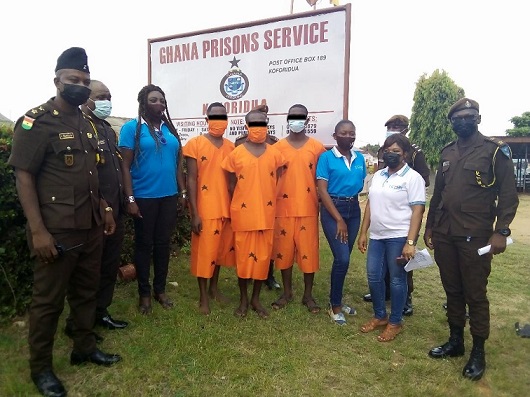 Two of them (20 and 27 years) were serving nine months jail terms on charges of stealing whilst the 18-year-old had been sentenced to nine months in jail with hard labour for failing to report an accident and failing to attend to an injured person.

The 18-year-old boy was riding with his elder brother on a motorcycle when the motorcycle knocked someone.

The brother failed to stop and sped off.

They were later arrested and the 18-year-old for being an accomplice, was fined GHC1,200 and because he was unable to pay, had to serve nine months in jail.

He had served one month in prison before CHRI paid for his freedom. His older brother was jailed without an option of a fine.

Ms Mina Mensah, the Director, CHRI Africa Office, in an interview with the media, said the continuous awarding of custodial sentences for non-payment of fines by the state to certain non-violent/minor offenders was not only unfortunate but hampered efforts at decongesting the prisons and improving the system.

She noted that such sentences amounted to criminalising poverty since most of such offenders, more often than not, were people with poor background.

“Obviously when a rich man breaks the law and is arrested and fined, he would be able to pay but that is not the case for the poor man….that’s why we are calling for the decriminalising of some of these offences,” she said.

The outbreak of the COVID-19 pandemic, Ms Mensah said, offered the country an opportunity to take a relook at its custodial sentencing laws, and proffer alternative non-custodial sentences to such offenders to minimise congestions in the various prisons.

“We think that it is high time policy makers, the executive, paid attention to these minor economic crimes that people commit because of their social status in life….Poverty cannot be made a crime,” she said.

“We need the Parliamentarians, our executives to ensure that appropriate laws are made to make sure that citizens do not unduly suffer.”

Over the past four years, CHRI has been advocating the decriminalisation of offences deemed petty, to decongest the country’s prisons.

Statistics from the Ghana Prison Service indicate that the country’s prisons were overcrowded by 52 per cent with more than 15,000 inmates occupying an Authorized Holding Capacity of 9,945.

Funded by the Open Society Initiative for West Africa (OSIWA), the project seeks to free a total of 60 convicts serving custodial sentences for petty offences in various prisons across the country.

So far, it had ensured the release of some petty offenders from the Ankaful Maximum Security Prison (3), Awutu Camp (2) and Winneba Prison (1), all in the Central Region; James Camp Prison (2) in Greater Accra, and six from Kumasi Central Prison in the Ashanti Region.

The Deputy Director of Prisons, Mr Kwaku Ababio Ali, Officer-In-Charge of the Koforidua Prisons, commended CHRI Africa Office and OSIWA for the gesture and appealed to philanthropists, human rights organisations and Non-Governmental Organisations to go to the aid of such prisoners to help decongest the prisons.

He cautioned the youth to be extremely careful to avoid falling victims to the law.

The ex-convicts expressed gratitude for the assistance and promised to avoid recurrence of the situation.

The beneficiaries were given GHC200 each to facilitate their movement to their various destinations.

Ghanaians urged to champion the implementation of Case Tracking System

ADR and Legal Aid Commission Acts To Be Reviewed