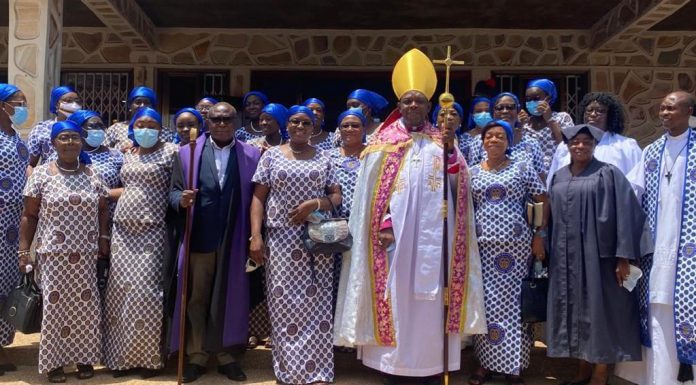 The Mothers Union of the Christ the King Anglican Church, Sakumono, has commemorated its eleventh anniversary with a thanksgiving service.

As part of the commemoration, the Union donated to the Holy Trinity Anglican Church at New Ningo in the Tema Archdeaconry, in fulfilment of one of the core mandate of the Union; to touch and change lives of underprivileged and underserved.

The items included; 20 plastic chairs, white board markers, electrical materials, four cartons of soap, used clothing and footwear, painting of place of worship amongst others.

However, she said; “the Union has resolved to commemorate this milestone with a thanksgiving service in honour of the Almighty Father and also appreciate our Patrons and friends of the union”.

She indicated that the Union had previously donated assorted items to the St Nicholas Seminary in Cape Coast; supported the Children’s Service of the Parish; and refurbished Church pews.

Mother Techie-Mensah expressed appreciation to the Patrons of the Union, the Parish Priest for his spiritual counsel and all those who in diverse ways had supported their programmes over the years.

Mother Torgbo, Founder of the Christ the King Chapter of the Union, called on the Executives and members to pray fervently for the transformation of the Union by growing it spiritually and numerically.

The Most Reverend Dr Cyril Kobina Ben-Smith, Archbishop of the Internal Province of Ghana, called on parishioners to remain faithful in their service to Christ and the Church as God blessed those who were faithful and believed in his divine nature.

The Mother’s Union is a Christian Organisation in the Anglican Communion, focused on charity and supporting families with over four million members in 84 countries.