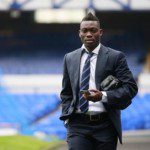 AFC Bournemouth loanee Christian Atsu is aiming to have a better season than the one he had with Everton last season after completing a season long loan move from Chelsea.

The Ghanaian joined up with his new team mates for the first time this week as the Cherries returned for pre-season training ahead of the new Premier League campaign.

The 23 year old cost Chelsea ?3.5 million two years ago but is yet to play for the Premier League champions, instead he has been sent out on loan with Vitesse and Everton prior to his move to Dean Court.

Last season he made just 13 appearances for Everton, with 7 of those appearances coming in the UEFA Europa League.

?Getting to a new club is not easy, You have to work really hard and make new friends which is also difficult, but I am trying!he told BBC Radio Solent

?I think with Bournemouth, the way I see how the players are, they`re really friendly and their coaches are also supportive so I think everything will be easy for me here.

?I can`t wait (for the new season) because last season wasn`t that good for me, but this season I am trying to work hard and get into the game, and to score my first Premier League goal.?