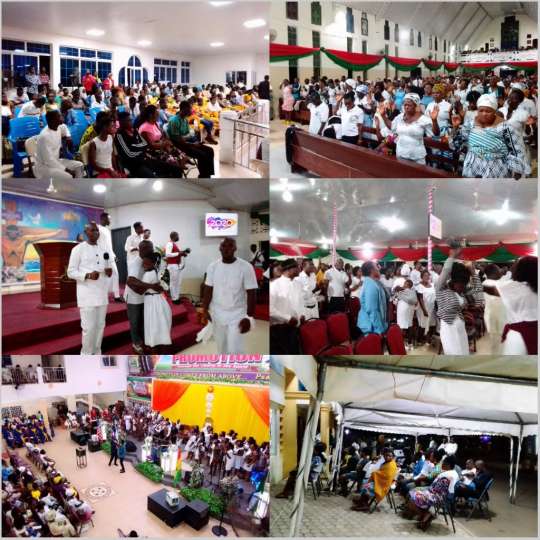 Churches in Hohoe including Charismatic, Orthodox and Interdenominational churches have held 31st December all night church services to usher in the New Year, 2020.

Most churches were filled to capacity with congregants clad in all white or with a touch of white attires.

The watch night services were characterized by prayers, praises and worship, testimonies, and adoration to God for a successful 2019 and a better 2020.

At about 1900 hours, sounds and sparkles from explosives could be heard and seen in the streets and street corners, and churches.

Pastor Benjamin Acquaye, Head of Hope Temple of the International Central Gospel Church (ICGC), in a sermon asked Christians to be full of hope and not to rule themselves out in 2020 because of circumstances they endured in 2019.

“Let me prophesy in your life that before the first quarter of 2020, you will prevail in your finances, businesses and education. You never thought it will happen but I declare over your head that Jehovah will meet you at the point of your needs.”

Apostle Dr. Ernest Adulai, the Senior Pastor of the Revival Assemblies of God Church, said any Christian that had the belief that they were destined for greatness and success would surely achieve them since nothing including death could stop them.

“As we start another decade, I want to tell you that special things happen in the beginning of decades. I declare 2020 will be your year full of blessings,” he said.

Apostle Dr. Adulai called on the youth to live worthy lives and eschew all forms of social vices such as stealing.

Prayers were said for Ghana, the Presidency, Ministers of State, Institutions, and the citizenry.

At the stroke of midnight January 1, 2020, people shouted and bells rang with fireworks to announce the break of a new dawn as congregants were heard wishing one another “fe yeye na mì” (Happy New Year).

Kiki’s Court, Obama Gardens, Malaysia Pub and Ghana @ 50, major drinking spots in the town were almost empty as managers of Kiki’s Court shut services with the hope that the morning of the day would be ‘better’.

There was police patrol in town while officers were stationed at some churches with most busy streets blocked to manage motor and vehicular traffic.