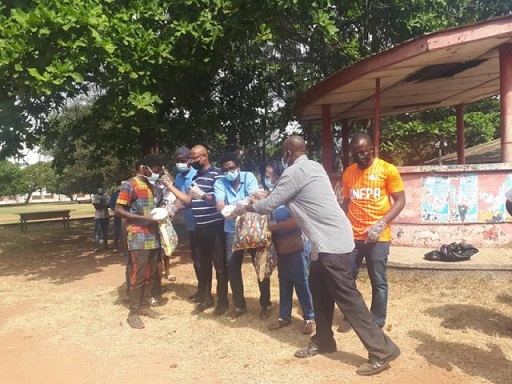 “It is a moment of great joy for me going home after many years of living on the streets of Accra, yet anxious about the reception from my family,” says Mohammed Gamado, aged 19 years.

Gamado, a native of Wa in the Upper West Region of Ghana and a former street child, will for the first time in many years celebrate the 2020 Christmas and the ensuing New Year with his family after spending many years living on the streets of Accra.

Sharing part of his life story with the Ghana News Agency in Accra, Gamado, said he migrated to live with his father who works in a local bank in Accra, but had to leave the home at age of 13, because he could not bear the maltreatment by his step mother, and the fact that his farther refused to do anything about his predicament after several reports to him.

“I left home to live with some friends at ‘Kantamanto’ a suburb in Accra, and later to slum areas around the Kwame Nkrumah Circle and Kaneshie, and all efforts by my father to bring me back home failed, because I had started smoking Indian hemp, and was enjoying my new lifestyle and freedom. I loved this, and told myself that I simply cannot go back to live under subjection”.

Living on the streets and especially at night, he confessed, was very difficult and scary, but “I was determined to survive there than to go back home to the bondage and torture of a ‘wicked’ step mother, so I kept pushing myself against all the difficulties towards survival”.

With his gaze fixed on a small sea pebble on the ground, throughout the interview, and later digging up the stone that seem to have been locked down there for many years, and rubbing it in his palm to clear the dirt from it, he shyly murmured, how he misses his family, and was glad to go back home now as a reformed person.

Like many other young street boys are doing in Ghana today, he was surviving on the benevolence of people after cleaning their vehicle windscreens when the traffic lights turns red, and on a worse day, had to share a meal with any of his closest friends.

He also did all kinds of menial jobs which he termed as (Kpa Kpa Kpa), to get extra money for his clothing, food, and sometimes his sleeping lodges, and he confesses that he took to smocking Indian hemp because it gave him extra strength to work without feeling tied.

He however recounted a friend introduced him to the weekly meetings that were organised by the Enhancing Youth Education and Health (EYEH) Soup Kitchen, a Non-governmental Organisation, at the Efua Sutherland Children’s Park in Accra, for street children, mainly the youth.

The EYEH Project, which is currently being run by a group of retired career women, and supported by several stakeholders including the United Nation’s Population Fund (UNFPA), seeks to provide care and support for these teenagers with the aim of removing them from the streets, hence it gather these vulnerable group, and provide them with services such as medical screening, counselling including spiritual upliftment, career and educational guidance, personal hygiene packages, recreational activities, and a hot meal.

It was through such regular interactions and commitment to the course that Gamado received his call by the Organisation to live in a shelter at Madina, and is now enrolled under a three-year full scholarship auto mechanic apprenticeship programme at the National Vocational Training Institute (NVTI).

He now helps the Organisation to reach out to other street youth for the weekly programmes, knowing the huge benefit which saved him from the cold of the nights on the street.

Gamado offered thanks to God for protecting him throughout these years on the streets and for the opportunity to be reunited with his family for the first time in many years as a changed person, and also thanked his benefactors for their support and the chance given him to revive his life, hoping that his desire to join the National army in future to offer his expertise as an of auto mechanics will become a reality.

“Streetism,” which has become a growing global phenomenon, especially in most developing countries including Ghana, is a broad term used to encompass the desperate situation of children who are forced to spend most of their lives outside of their homes, to engage in menial jobs to make a living, while ‘sleeping on streets’.

This silent and looming crises is becoming a monstrous challenge for the Government of Ghana and its Agencies to tackle, considering the growing numbers of an otherwise powerful human resource base, which is currently going waste on the streets of major cities of the country.

Varied studies by the UNFPA have shown that street children are usually the victims of poverty, lost, negative cultural and traditional practices like child marriages, child slavery, Female Genital Mutilation (FGM), and domestic violence, including both physical and mental abuses, and in their desperation, resort to living on the streets after finding no alternative habitation.

They are exposed to hardships, poor health conditions and illnesses such as Sexually Transmitted Infections (STIs including HIV and AIDS, Syphilis and Gonorrhoea), and now COVID-19; working in unconducive environments, vulnerability to sexual abuses like defilement, rape and sodomy, with majority of the teenage girls, often left with unwanted pregnancies by irresponsible men who lure them with money for sex.

There is also the growing threat of these children being lost to narcotics and other dangerous drugs, making robbery a lucrative trade for these vulnerable surviving groups.

Ms. Adjoa Amana, a Director, EYEH Soup Kitchen, also talking to the GNA, said although NGOs and charity organisations do extend forms of support to street children, it is not enough, as the needs exceeds the capacities of individual institutions.

She says the Organisation usually extends its benevolence annually, to other street children in areas including the Kantamanto, Kwame Nkrumah Circle, Kaneshie, but the COVID-19 restrictions in 2020, has unfortunately prevented this, but they were able to fete about 150 street youth this Christmas and provide them with some personal hygiene boxes and clothing, to serve as a motivation for the others.

Mr Seth Appeagyei, a Social Worker and Psyco-Social Analyst, who is in-charge of ‘Streetism’ at the Department of Gender, of the Ministry of Gender, Children and Social Protection, explains that his outfit, works with several stakeholders including Civil Society Organisations, NGOs and development partners, to address the challenges of ‘streetism’.

He attested to the fact that the EYEH project has since its inception last year, reunited about 21 street children with their families, while others have also been enrolled under various apprenticeship programmes, however, the target is to get as many children as possible out of the streets by 2030.

He encourages parents and guardians, to contact the Gender Ministry for appropriate guidance and referrals to the CSO and NGOs, who are trained to offer such social services with regards to adolescent behavioural challenges among others.

Achieving success, of this national crisis, will require strengthened collaboration among by all institutions, harmonisation of the diverse strategies, gathering adequate and quality data for effective planning and implementation of practicable policies and programmes.

The Government must also demonstrate a stronger political will by improving Ministry’s budget for targeted research, support the retooling and training of the requisite personnel of the Gender Ministry, NGOs and CSOs, for accurate data collection and dissemination, for designing and implementing drastic exit programmes and strategies towards elimination by 2030.