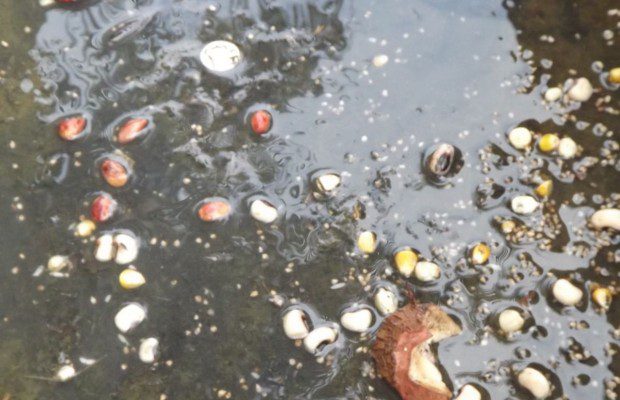 The purported fracas between members of the prayer group and some elders of Mystery School, a spiritual church at Apremdo near Takoradi in the Western Region, took a dramatic twist yesterday when some persons allegedly prepared a charm and placed it at an entrance of the church. ? ? ?The materials used for the charm

The said charm was purportedly meant to harm members of the prayer group spiritually when they decide to go to the church premises for their activities.

The members had for some time now been reportedly accusing the elders of adopting various means to prevent them from having access to the temple for their prayer meetings.

They alleged that some of the elders had sometimes been locking the doors to the temple and other rooms deliberately to thwart the efforts of the group relating to their meetings.

They averred that all efforts to prevail on the said elders and their agents to stop their acts fell on deaf ears, stressing that it had the tendency of throwing the church into chaos.

Members of the prayer group alleged that the elders claim that prayers are alien to the church and that the members of the group were importing things that were not part of the church?s doctrine.

Some church members were therefore astonished when during their visit to the church premises yesterday, they found some strange materials suspected to be a charm, spread at one of the entrances of the church.

When DAILY GUIDE visited the scene, it was revealed that some items, including palm nuts, cowpeas, salt, pieces of cassava and some coins were spread at one of the entrances of the church.

The church members told DAILY GUIDE that they had a call on Thursday evening that some strange women were seen performing some rituals at the entrance of the church.

When they (church members) went there yesterday morning, they saw the items spread in front of one of the gates.

?You know that in this area whenever these materials are found, they are either to curse someone or attack somebody spiritually,? the church members remarked.

?The bible says we should not worship any other god beside God and so we don?t understand why some people will like to introduce rituals as part of the church?s doctrine,? one of them told DAILY GUIDE.

Speaking to DAILY GUIDE, Thomas Eshun, one of the prayer warriors, disclosed that the church was founded by the late Thearch Daniel Arthur in 1956.

He maintained that the church?s doctrine was based on the Christian philosophy that teaches how to possess the Holy Ghost and enable one?s soul to gain entry into heaven when one dies.

He indicated that when the founder of the church was alive, the temple, located at Apremdo, was opened to all who wished to pray there.

He alleged that since the demise of the founder, some strange things had been occurring ? slaughtering of animals and sprinkling of blood in the mission house by the head preacher.

When DAILY GUIDE contacted Mr Martin Asante, one of the elders, he denied knowledge of the alleged ritual and pointed out that he was yet to visit the church to ascertain the truth or otherwise of the story.