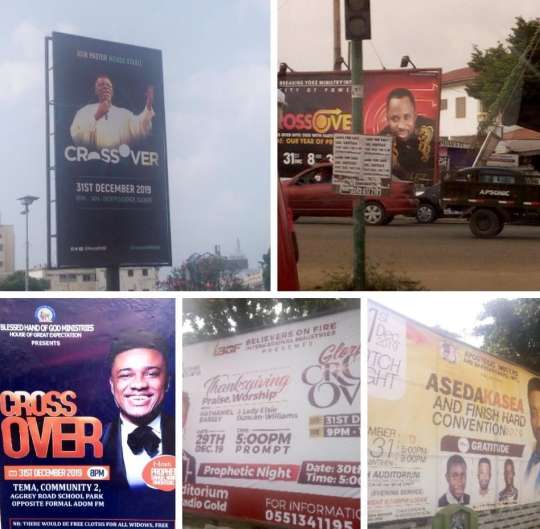 The countdown to sound the last trumpet for 2019 has begun in earnest with numerous churches especially the charismatic Ministers of the Gospel hijacking the process to end the year and usher us into the New Year of 2020.

Scores of church leaders are competing for advert space along some principal streets of the national capital with promotional billboards describing the nature of their send-off plan for 2019.

Others have a twin-like event whilst bidding farewell to 2019 with musical and prayer festivals on one hand, these churches have a colourful plans to welcome 2020, Ghana News Agency observed during a tour of Accra.

At Midnight on December 31, churches are expected to end 2019 and open the new chapter for the New Year. This has caused churches in the country to put together all night and half night services to empower their members to enter the New Year, 2020.

The streets, social media platforms, radio and television stations are full of advertisements of various church programmes towards the event.

The GNA has that the Orthodox, Pentecostal, Charismatic and Spiritual churches have all decorated their auditorium with Christmas colours and lighting and flower decors.

The GNA noticed that, most of these churches have developed themes for the December 31 watch service – crossover night, walkover night, pass over night, jumped over amongst others.

The most important hour in this service falls between 11:30 hours to 12:00 hours where the Minister of the Church leads the congregant to enter a prayer session to enter the New Year, which is crowned with victory songs and jubilation immediately after mid-night.

Glorious Crossover by Believers on Fire International Ministries was also spotted on a billboard along the same street; also was the Apostolic Movers and Shakers Chapel International’s advert with the headline Asedakasea and Finishhard Convention both would host the night service in their auditoriums.

At the Sakumono junction in Tema, the Breaking Yoke Ministries International, City of Power, Klagon has its event published on a billboard.

Blessed hand of God Ministries, Tema, had posters all over, preparing to hold its crossover night on the Aggrey road school park in Community 2.

Revival Outreach church La had also advertised its prophetic crossover service, to be held at its chapel.

This and many other advertisement could be seen as on drives within Accra and its suburbs.