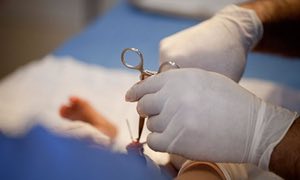 Circumcision is not safe.

Circumcision removes a natural, healthy, functioning body part comprising about one-third of the erogenous tissue on the penile shaft, about 74 sq.cm. Studies show that foreskin protects the penile head, enhances sexual pleasure, and facilitates intercourse. Cutting it off removes many thousands of specialized nerves and results in thickening and progressive desensitization of the outer layer of the penile head, particularly in older men. A survey showed that circumcised men were 4.5 times more likely to use an erectile dysfunction drug.

In another survey men who were circumcised after they became sexually active reported decreased sexual enjoyment after circumcision. One described it as like seeing in black and white compared to seeing in color. A study showed that circumcision removes the five most sensitive parts of the penis. In a survey of those with comparative sexual experience, women preferred the natural penis over the circumcised penis by 6 to 1.

Surveys of circumcised men and clinical reports show that when men recognize their circumcision loss and experience associated decreased sexual sensitivity, they report wide-ranging psychological consequences. In addition, men circumcised in Africa could be subject to a complication rate of 35% for a traditional circumcision or 18% for a clinical circumcision.

Circumcision is not effective.

The claim of three studies that adult male circumcision significantly reduces the risk of men acquiring HIV is refuted by many professionals.

1. Even if the claim were true, based on the rate of infection in the studies, about 60 men had to be circumcised to prevent one HIV infection. The other 59 men did not receive benefit. The 60% relative reduction claim is deliberately misleading. The absolute reduction is 1.3%.
2. The methods used in the studies were flawed. The effects of other variables that would influence HIV infection were not considered, and critical data were omitted. For example, HIV status of female partners of men in the studies was not determined.

4. Condoms are better than 99% effective. Professionals state that “behavioral factors [e.g., using condoms and frequency of intercourse] are far more important risk factors for acquisition of HIV and other sexually transmissible diseases than circumcision status, and circumcision cannot be responsibly viewed as ‘protecting’ against such infections.”

5. Using or promoting unnecessary surgery when much less invasive, much less costly, and much more effective methods are available (e.g., condoms) raises ethical concerns. The cost of one circumcision in Africa can pay for 3000 condoms. Significantly, the HIV studies recommend the use of condoms in addition to circumcision. Because of the superior effectiveness of condoms, circumcision adds little additional protection. Unlike circumcision, condoms have the advantage of protecting women, and there are no surgical risks and complications. Obviously, condoms are the preferred option.

6. If circumcision results in lower condom use, the rate of HIV infections will increase. Unfortunately, with the promotion of circumcision as a “natural condom,” some African men have chosen circumcision with the mistaken belief that they will not have to use condoms following circumcision.

8. The studies were not consistent with other evidence. Data from 109 populations comparing HIV prevalence and incidence in men based on circumcision status were evaluated. Circumcision did not reduce HIV infections.

Circumcision promotion is biased and flawed.

The 2007 recommendation of circumcision for preventing HIV transmission occurred at an event organized by the World Health Organization (WHO) and the Joint United Nations Program on HIV/AIDS (UNAIDS). The recommendation process was controlled by circumcision advocates who did not allow open debate.

Organizations like WHO and UNAIDS are controlled by money from the U.S. government and American foundations. Consequently, their policies on circumcision are strongly influenced by the American cultural bias in favor of circumcision that seeks to find “benefits” for circumcision, avoids studying harm, and uses flawed research to promote circumcision to African countries and elsewhere. Most of the world knows better. Aside from Muslims, Americans, and Jews, only about 5% of the world circumcises. No national medical organization in the world recommends circumcision, and thirteen organizations oppose it.

The WHO circumcision “expert,” David Tomlinson, has a conflict of interest because he promotes and sells his own circumcision device to Africans and others. Tomlinson was asked to identify the functions of the foreskin, and he did not know! The WHO does not answer written inquiries about circumcision.

International AIDS experts and profiteers have the financial power to force their lucrative agendas on Africa. “In the fight against AIDS, profiteering has trumped prevention. AIDS is no longer simply a disease; it has become a multibillion-dollar industry,” stated Sam Ruteikara, co-chair of Uganda’s National AIDS-Prevention Committee. Robert England, who heads the charity Health Systems Workshop, wrote, “We have created a monster with too many vested interests and reputations at stake.” Zambia MP Elias Chipimo said, “When millions of aid money flood into the country, nobody asks questions.”

The tragic outcome: tens of millions of African men are being deceived into getting circumcised.

References are available upon request.

Ronald Goldman, Ph.D., internationally-known psychological researcher and educator, is executive director of the Circumcision Resource Center and author of Circumcision: The Hidden Trauma. His writing on circumcision has appeared in medical journals and parenting publications, and he has participated in over 200 media interviews. Circumcision advocates have refused invitations from national media to debate him.