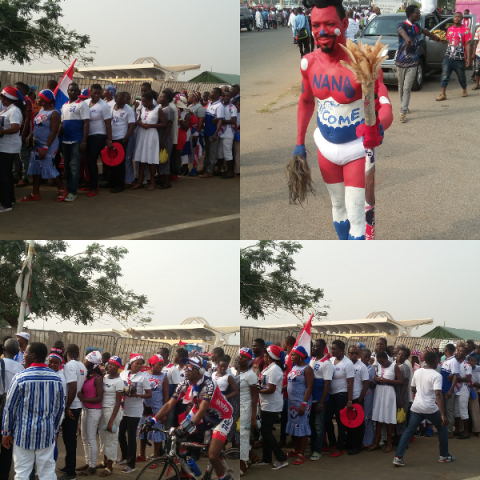 Euphoria has characterised the mood of Ghana’s capital, Accra, as citizens with both partisan and national interests unite to celebrate the investiture of the Fifth President of the Fourth Republic, on Saturday, to advance the country’s democratic credentials. 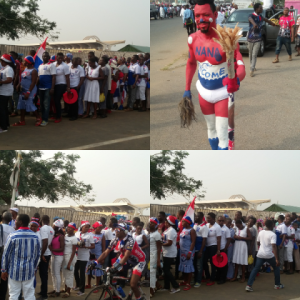 Dressed in the national colours of Red, Yellow, Green and Black, the rich colours of the traditional kente fabric and the Blue, Red and White colours of the New Patriotic Party, residents almost every in the city, cheered, danced or waved to the sounds and sights of the celebration.

The pomp and pageantry was at its peak from the Accra Senior High School Area at Ridge, heading all the way down to the National Theatre through the Ministries Traffic Lights to the Accra Sports Stadium.

Chief Justice Georgina Wood administered the Presidential Oath, taken by Nana Addo Dankwa Akufo-Addo, at the Black star Square, which has been converted into a chamber of Parliament.

The motor traffic situation around these areas was being very well handled by personnel of the Ghana Police Service, whose massive presence were seen all over the routes to the Black Star Square.

Some of the celebrants who spoke to the Ghana News Agency, said they had come all the way from Kasoa, Mallam, Kwashiman, Sowutuom, Tema, Nima and also from all across the regions of the country.

They expressed their satisfaction at the way the entire swearing-in ceremony had been organised and coordinated by the respective institutions assigned to handle various roles.

Their hope was that Ghana would become the winner instead of individuals taking credit for all that had been achieved, and Ghanaians would also learn to give due honour to God for the breakthrough in terms of the peace being enjoyed now by all.

Meanwhile, traders have set up at the pavements to sell anything they could brand in either the national or NPP colours.

Even water, kenkey, and porridge sellers attempted to attract customers by associating them with NPP or Nana Akufo-Addo.