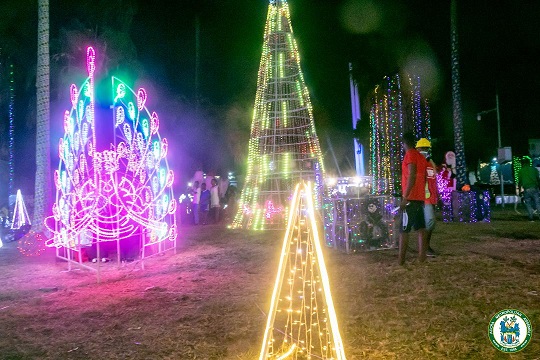 The Accra Metropolitan Assembly (AMA) in partnership with the Korle Klottey, Ayawaso West, and Ablekuma West Municipal Assemblies have “light up the city” to usher city dwellers into the festive season.

The initiative, which is being powered by Jandel Limited, an Event Management organisation and supported by Mullen Lowe and BTL Africa, as well as other corporate institutions, is aimed at beautifying the city and promoting tourism through contemporary art and paintings.

Mr Mohammed Adjei Sowah, the Accra Metropolitan Chief Executive (MCE), who officially lighted up the city, said the event formed part of the Assembly’s plans to make Accra visible and attractive to tourists locally and internationally.

“Accra is a very vibrant city and so we thought of an event to light up the vibrancy and passion of the people which gave birth to the concept of beautifying Accra.”

He expressed the Assembly’s commitment to making Accra an art and tourism city to boost the local economy.

“We started by greening open spaces in the city and painting public walls. We are eager to rebrand Accra and sustain it as an art and tourism city as well as a leading commercial and industrial hub,” he said.

The MCE said; “despite the COVID -19 pandemic the Lord had been good, hence, the reason to celebrate Christmas and say thank you to the Lord.”

Madam Afi Amoro, Chief Executive Officer of Jandel Limited, was hopeful the initiative would improve the socio-economic impact of Ghana’s capital through culture and tourism as well as open up employment opportunities for local artisans.

She said the initiative was being replicated throughout the country, adding that Kumasi and Takoradi had already been “lit up”.

Mr Daniel Sackey, the Managing Director of Ecobank Ghana commended all corporate institutions for coming on board and that his outfit’s decision to support the second edition of the programme was in line with the bank’s 30th anniversary celebration.

“For us, it was a strange idea when we were first approached, but at the end of last year and right into January, seeing the joy on the faces of people in the communities where we draw our clientele was a motivating face to continue to support the initiative,” he said.

Mr Sackey said: “As banks, we also say that we have a role to play when COVID-19 struck. Today, virtually all our partner banks can provide financial services. Clients can access those services from the comfort of their homes and offices without coming into the bank.

“And this has been made possible by the investments that we’ve all put in and that is the spin-off we’re seeing by way of the support to the community.”

As part of the “Light up Accra” initiative shoulders and kerbs of principal streets have been painted, with lawns neatly mowed and decorated with Christmas lights.