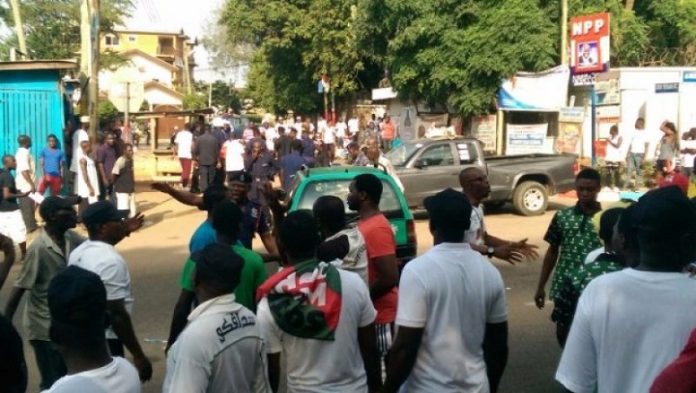 The Alliance of Rural Community Women, a civil society organization, on Friday condemned acts of violence that characterized the presidential and parliamentary elections in the Techiman South constituency of the Bono East Region.

The Alliance is a coalition of NGOs, including the Center of Posterity Interest Organisation (COPIO), Peace and Mediation Committee, Women Voice and Leadership, and Women Caucus and Advocacy for Peace (WOCAP).

A statement signed by Mr Mustapha Yeboah Maison, the Coordinator of the Alliance, and copied to the Ghana News Agency (GNA), called on election stakeholders to remain calm and allow peace to prevail in the interest of development.

It, however, commended security agencies in the area for the professional manner they handled the election violence and called for swift investigations for justice to prevail.

“We, therefore, wish to express our profound gratitude and appreciation to all security agencies and the traditional authorities in the Techiman Municipality for the sacrifices and contributions to a successful general election. We acknowledge your commitment in working tirelessly to contain tensions and pressure to maintain peace, law and order in Techiman,” the statement said.

“We, however, regret the unfortunate incident that happened at the collation centre leading to the loss of lives and injuries as well as the destruction of properties. We call for peace to reign amidst these post-election disturbances in the Techiman Municipality,” it added.

“Peace is a basic necessity for national development and as such must be an enviable asset to be protected by every individual, community, and nation. No country, society, community or individual develops amid violence.”.

“The recent politically motivated violence in the Techiman Municipality is a strong force that can jeopardize the peaceful co-existence among residents. It has the tendency of marring the sound, competitive, and enviable social, economic, and political development Techiman has experienced over the years. This is an achievement that cannot be traded for anything,” the statement.

“Politically motivated violence fuels an iota of fear that aggravates the effects of individual attacks. For instance, residents within the Techiman Municipality and its environs are afraid to go about their normal daily activities for the fear of being attacked.”

“Political violence comes with its own implications on general health conditions, particularly mental health such as depression and anxiety among others. Notably, the WHO indicates one-third of people exposed to political violence will endure some type of mental distress (WHO, 2001)”.

“Political violence has the tendency of diverting resources meant for education, social and political engagements, responsive public systems, economic development among others to the protection against the harmful impacts it has on human lives, properties, and other spheres of the society”.

“Unstable political atmosphere will deter investors and potential investors from doing business in the Municipality, which has a rippling effect on the Region and the Nation at large because Techiman Municipal is a beckon of economic development in Ghana and Sub-Saharan Africa. It links the Northern part of Ghana to the South and is growing at a fast pace, particularly in economic activities and any political violence in is likely to affect the whole country and Africa”.

The statement called on religious and traditional leaders, civil society organisations and actors as well as political parties to as a matter of urgency collaborate and find lasting solutions to the post-election violence.