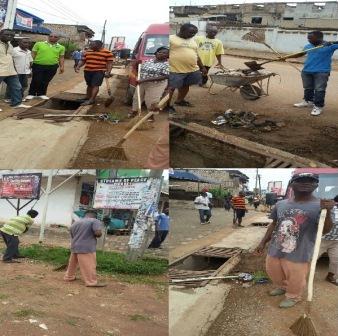 Members of Accra-North East District of the Seventh-Day Adventist Church, at the weekend undertook a three-hour cleanup exercise at Taifa, a suburb of Accra. They cleared choke gutters and cleaned the surroundings of filth and weeds.
Pastor Richard Davies, District Head of the Church told Ghana News Agency that the exercise was one of the principles and pillars of the mission to keep good and healthy lifestyles.
He said the exercise took place in the 23 branches of the church in Ga West Municipal Assembly.
He said the church would be part of the government?s decision of using the first week of every month to undertake a national cleanup exercise.
?We have decided to be part of the national cleanup exercise which the government has set up, but we have decided to undertake the exercise earlier before the national one to serve as an example for others to emulate so that the country becomes clean to prevent diseases.?

I Never Scam Them – Nana Agradaa Speaks After Her Arrest

At least 35 Dead, 45 Injured in Church Blaze in Egypt’s Giza