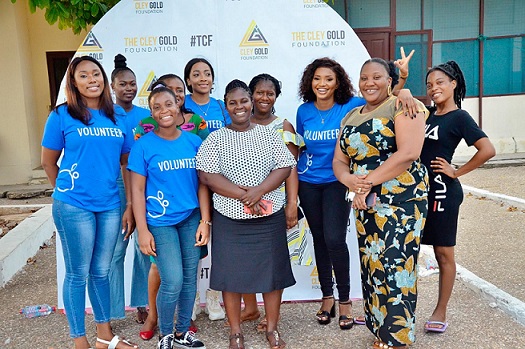 CleyGold Foundation, a non-governmental organization (NGO) has made donations to two orphanages as part of their Corporate Social Responsibilities (CSR).

The donations were made to the Royal Seed Homes in Kasoa, Central Region and the Osu Children’s Homes in the Greater Accra Region during the festive season.

The items given to both homes on different occasions included; learning materials, toiletries, toys, and assorted food items.

At the Osu Children’s home in particular, a special party was thrown for the inmates and they had a lot of fun and an amount of GHC 2,000 given to the homes in addition.

Madam Jessica Nwachukwu, the Chief Operating Officer (COO) of CleyGold International Company said it was a privilege for them because it formed part of their roles and responsibilities “to look at people the Foundation felt were in need of our time and attention.”

She noted that it was important especially during the festive season for children in orphanages to be shown love and made to feel good about themselves.

She said the Foundation would continue to identify and help vulnerable members of the society.

She called on benevolent societies to support and donate to the kids in every way possible. “If you cannot feed a million people, just feed one.”

Madam Yvonne Patricia Norman, Manageress of Osu Children’s Home, said they were grateful to CleyGold Foundation for the kind gesture shown them adding that this is the best event the Orphange has ever witnessed since her opening.

She appealed for more of such support from CLEYGOLD Foundation and the benevolent society at large.