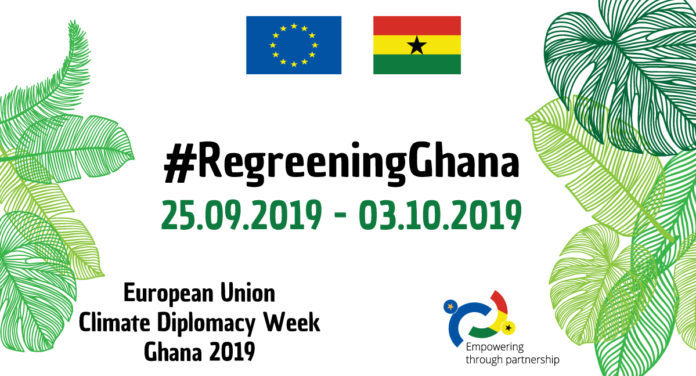 As part of activities marking this year’s Climate Diplomacy Week, the European Union Delegation to Ghana, with the Accra Metropolitan Assembly, will plant 30 trees along the Ring Road West, Korle Gonno in Accra on Monday, 30th of September, 2019.

The EU Ambassador Dianna Acconcia, the Mayor of Accra, Mohammed Adjei Sowah and the Ambassador of the Member States of the European Union, represented in Ghana, will participate in the activity.

This initiative is being implemented under the EU Climate Week 2019. The Climate Diplomacy Weeks are organized all over the world by EU Delegations to create awareness on the impact of climate change in the world.

They are also meant to strengthen the global response to the threat of climate change in the context of sustainable development.

This year, the theme in Ghana is reforestation, with the slogan #RegreeningGhana, because we need to plant trees to fight climate Change and protect the environment.

In fact, trees are essential for the preservation of our planet: they contribute to their environment over long periods of time by providing oxygen, improving air quality, climate amelioration, conserving water, preserving soil, and supporting wildlife. During the process of photosynthesis, trees take in carbon dioxide and produce the oxygen we breathe.

The tree planting will take place on 30 September at 09.30, at Korle Gonno, in front of the Bukom Boxing Arena. The meeting point will be at Saint Mary’s Girls School.
Background:

The ‘youth for climate’ movement that is rapidly developing around the world is a sign of the growing awareness in our societies that climate change is a reality already today and that it will increasingly affect the future of the young, their children and their grandchildren if we fail to act now.

The EU has been in the front line of climate action and is keen to promote a learning dialogue and build support for the structural change necessary for the transition to low-emission, climate-resilient societies, particularly among younger generations whose futures are the most threatened by climate change. Young people also stand to profit the most from this transition.

President of Africa Swimming Confederation in Ghana for the continental championship