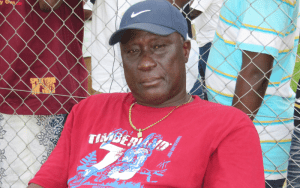 Ashantigold coach Bashir Hayford has lashed out at referees for ?killing? coaches prematurely in his latest salvo targeted at the men in black.

The experienced trainer is incensed with how low the profession has sunk in recent times claiming coaches have been rendered wifeless, homeless and jobless with their decisions on the pitch.

Hayford is the latest Ghanaian official to express concern about the level of officiating in the Ghanaian top-flight as pressure mounts on officials to improve their stock as the season reaches home stretch.

?A referee can make a coach wifeless because the wife can divorce the coach (if bad refereeing makes them lose their job. We are doing our best to make the game enjoyable. Those who are in the middle should also do their part.

He went on: ?If we were ordinary workers like everyone else, then they can do whatever they want. But we are not (ordinary workers). With just one blast of the whistle (if the decision is wrong), you?ll get light off (die), and you?re gone. Ofei Ansah (former Hearts of Oak coach who died after collapsing while coaching the team) is gone.?

The former Medeama and Kotoko tactician has been vocal about the decision of referees as his team inches closer to their first Premier League title in two decades.

He is currently on a warpath with journalists in Ghana?s second largest City, Kumasi, threatening to expose their poor grades in school for their constant attacks on his pedigree.